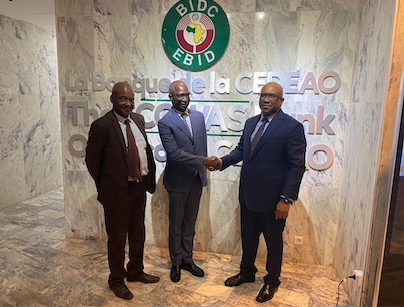 Mr. Thierno Seydou Nourou SY, new President of the Association of West African Banks (ABAO), continues to implement his strategy to revitalize this Association, which brings together the two hundred and fifty (250) Commercial Banks , Financial Institutions and Financial Institutions of the fifteen (15) countries of the Economic Community of West African States (ECOWAS). To this end, he went to Lomé, Togo, accompanied by Mr. Séga BALDE, Secretary General of ABAO, where he held, on October 19 and 20, 2021, important meetings with the following Personalities , surrounded by their main collaborators:

On instructions from the Conference of Heads of State, major community projects such as the Single Currency and the Payment and Settlement System are advancing rapidly. Quite naturally, Commercial Banks and Financial Institutions will be the main operators in their implementation.

The same applies, among other things, to the implementation of projects and the application of the above devices.
after in ECOWAS countries:

Hence the importance of human, financial and logistical resources as well as the close partnerships with all its members that the ABAO needs to become fully involved in order to make their voice heard. All the personalities met were largely convinced by this plea from the new Executive Board of the ABAO. They warmly thanked him for organizing these meetings and warmly commended him for the clarity and relevance of his vision. They are committed to strengthening their institutional and financial support to this Association while becoming more involved in its operation.
We are hopeful that their example will be amply followed by all the other ECOWAS Banking Groups for the benefit of our Community, its Economic Agents and its citizens.

In Lome, Ecobank opens its 31st general meeting after a year with “solid” results