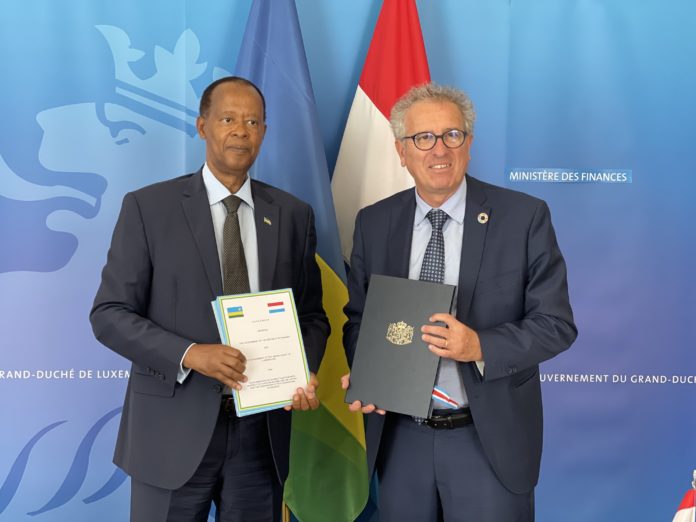 On this occasion, both parties exchanged on the excellent economic and diplomatic relations between Rwanda and Luxembourg. They also discussed ways to further strengthen bilateral and multilateral cooperation.

H.E. Dieudonné Sebashongore, Ambassador of Rwanda to the Luxembourg said:

“This agreement will allow both Luxembourg and Rwandan economic actors to go further in their mutual exchanges. For those who are willing to invest in Rwanda, including the diaspora, this agreement will increase their motivation and facilitate business.”

H.E. Pierre Gramegna, Minister of Finance of the Grand Duchy of Luxembourg stated:

“Our convention is another building block of the economic success that we wish you, (…) it will allow investment because without it (…), the convention will be an empty shell. On the surface, the signing of this convention may seem to be something administrative, but for all the countries with which Luxembourg has signed conventions on double taxation, the interest and the will is to strengthen bilateral relations, to make them easier, clearer and more transparent. In this way, we will be able to trade with each other and forge links that go beyond the framework of development aid”

Today’s DTAA signing between Rwanda and Luxembourg builds on the excellent economic relations between our two countries. Expanding our network of treaties is essential to our aspirations to transform Rwanda into an international financial destination, as we spearhead the next phase of Rwanda’s ambitious economic reform program.

Covid 19: Rwanda is preparing to manufacture its first vaccines