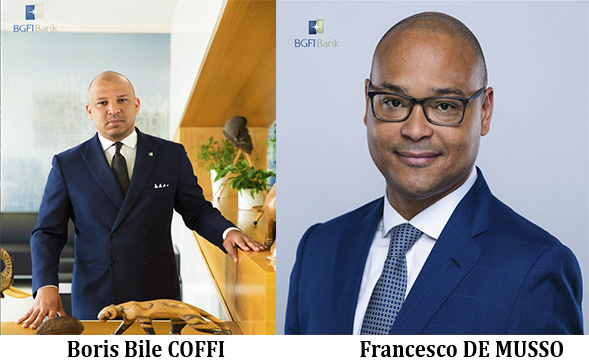 As part of internal promotions within the BGFIBank Group, the Boards of Directors of BGFIBank Europe and BGFIBank RDC, headed by their Chairman, Mr. Henri-Claude OYIMA, made the respective appointments of Mr. Boris Bilé COFFI and Mr. Francesco DE MUSSO as General Managers.

Boris Bilé COFFI, until then Deputy Managing Director of the BGFIBank Europe subsidiary, joined the BGFIBank Group in 2009 as part of the opening of the BGFIBank subsidiary in Côte d’Ivoire, after managerial experiences within institutions international financial benchmarks.

He took part in the launch of the subsidiary in Côte d’Ivoire by successively performing the functions of Deputy and Director of Commitments and Legal Affairs, before joining the Parisian subsidiary of the Group as Deputy Managing Director. Boris Bilé COFFI is appointed Chief Executive Officer of BGFIBank Europe, replacing Mr. Francesco DE MUSSO who has been promoted to Chief Executive Officer of BGFIBank RDC. Mr. COFFI will be assisted by Mr. Sébastien FOINANT, appointed as Deputy CEO of BGFIBank Europe.

Director General of BGFIBank Europe since 2016, Francesco DE MUSSO is driven by the research and promotion of African excellence in the service of the transformation of economic players. After 15 years of experience in international banking and financial entities, he joined BGFI Holding Corporation in 2013 as Group Inspector General and Head of the Control Department.

He is in particular in charge of the organization, supervision and follow-up of the execution of the annual control plan of the General Inspection, the instruction and the follow-up of special cases and the animation of the Internal Audit department within “The appointments of Mr. COFFI and Mr. DE MUSSO are in line with the continuity of the“ Dynamic 2025 ”Company Project, which will guide the Group for the next five years.

In line with obtaining the AML 30000® * certification, the subsidiary is continuing this perpetual search for excellence and still intends to fully implement its development actions within the framework of the deployment of the new “Dynamic 2025” Company Project ”a affirmed Francesco DE MUSSO, Director General of BGFIBank RDC.