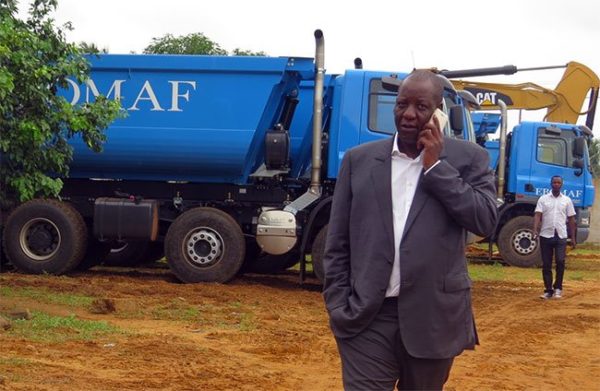 The construction magnate Mahamadou Bonkoungou, boss of the Ebomaf group (Entreprises Bonkoungou Mahamadou et Fils) active in West Africa, particularly (in 2014) in Guinea and which also has continental ambitions in the African banking sector and that of the insurance (in Burkina Faso, Djibouti and Togo) has just acquired an “operating license” for a gold mine in Guinea. This unofficial information neither in Burkina Faso nor in Guinea, and which made the headlines of several West African newspapers, was, in fact, leaked by the means of a person close to the boss of Ebomaf. And the media which practically relayed it in a loop were not able to specify the mining domain attributed to Ebomaf, nor the contours linked to the attribution of its mining title.

“Ebomaf will operate one of Africa’s largest mining sites. The start of construction work is expected before the end of the year and the first gold bar could be expected in early 2023 “, simply relayed the press, citing the anonymous source close to the Burkinabe billionaire. Because precisely, there were no more details than that. For its part, “Financial Afrik” tried to find out a little more about this “authorization to operate a gold mine in Guinea”, but ran into an omission from the Guinean Ministry of Mines. The project is unofficially admitted within the department; but no official communication around. No official statement, neither from the ministry, nor from the Mining Promotion and Development Center (CPDM) which manages the procedures for issuing mining titles and which, moreover, is the one-stop shop for mining investors.

The information that has leaked from Burkina Faso speaks of an “operating license”, the CPDM being the body which necessarily had to manage the issuance of this “operating license” in accordance with its prerogatives and the Guinean mining legislation in force. The Guinean mining code that we have consulted provides for 5 main types of mining titles (reconnaissance authorization, exploration permit, exploitation permit, mining concession, artisanal exploitation permit). Of these 5 categories, the operating license is the one that most closely matches the information that was leaked.

According to the procedure defined by the CPDM, the application for obtaining the exploitation permit is made to the address of the Ministry of Mines. Then, the company that subscribes to this request must provide detailed studies of the desired deposit or field of exploitation, in particular: the geological context; the map of the deposit; proven and exploitable geological reserves; the distribution of the contents; the development and operation plan and the profitability study; security measures; the socio-economic impact of the operation as well as an environmental impact study with a site rehabilitation plan validated by the Guinean Bureau of Environmental Studies and Assessments (BGEEE). This office under the Ministry of the Environment, Water and Forests has the particular role, in the specific case of the allocation of mining permits, to: prepare and submit for the approval of the ministry in charge of the environment environmental confirmed certificates, attesting to the compliance of a project with the environmental standards set out in the environmental and social management plan but also to ensure the compensation policy concerning the protection of the economic and social rights of neighboring populations in the event of expropriation of their property for public utility as well as the environmental feasibility of mining projects.

Have all these steps or studies been validated by Ebomaf in order to be able to benefit from the operating permit for a gold mine? At a time when the information that has leaked already announces “the start of construction work (industrial infrastructure) which is scheduled before the end of the year (we are only 4 months from the end of the year)” and projects a date for “the production of the first gold ingot which would be scheduled for early 2023”, all the data related to the project but also to the social, economic and environmental impact study should be presented at this stage to the audience. public as provided for in the mining code before being endorsed by the competent structures and widely disseminated through official channels. Our investigations show that a total vagueness surrounds the attribution to Ebomaf of its exploitation authorization, the same is true for the site of the deposit which is the subject of this future gold exploitation.

Could these be the potential Kounsitel sites?

This news comes in a context where chaos reigns in the locality sheltering the supposed “gold mines” discovered at the beginning of last June by the inhabitants of Kounsitel in the north-west of the country. This triggered an unprecedented gold rush in this locality and which, even today, is plagued by the invasion of illegal gold miners and anarchists, pushing the Ministry of Mines, on the instructions of President Alpha Condé, to requisition the site in order to launch in-depth geological studies to confirm the indications of the presence of gold veins in the basement of Kounsitel.

Could it be this site that was assigned to Ebomaf? This is a lead that could prove to be credible, since the Guinean government would have no interest in disclosing this information at the risk of worsening the already sufficiently unstable security situation there, three months later and despite all the bans, the fever gold has not yet fallen at Kounsitel.

What about the Ebomaf mining experience?

Generally recognized in the construction industry and firmly established in West Africa, Ebomaf remains a novice in industrial mining. One wonders by what subterfuge Mahamadou Bonkoungou ended up with an operating permit for “one of the most important mining sites in Africa” ​​as maintained by his relative who balanced the information in a wanted way or by clumsiness. What are the financial mechanisms, the strategic partnerships and the procedural prerequisites of the Guinean mining code that made it possible to conclude this acquisition? Many questions remain unanswered for the moment, given the blackout surrounding this “operating license”.

Mahamadou Bonkoungou’s company has heavy liabilities in Guinea. His name is associated with a financial scandal of “overbilling” in a contract to rehabilitate a national road in Guinea. In June 2014, the Guinean state entrusted Ebomaf with the rehabilitation of the “Kankan-Kissidougou” road axis, which is supposed to link Upper Guinea and Forest Guinea. A pharaonic road project with a length of 194 km, valued at more than 300 million dollars with financing from the national development budget (BND). The site will never be delivered because the work will never be carried out. To make matters worse, Ebomaf will receive payment of $ 65 million from BND for work never done. Worse, executives from the Ministry of Finance at the time will make a disproportionate use of payment authorizations (PA) in violation of traditional procedures for scheduling and monitoring financial circuits and Ebomaf will actually or fictitiously perceive the trifle of 185 million. additional dollars without respecting its contractual commitments. After being well served, Ebomaf will pack up and leave.

Official reason for the failure of the project cited by the government: Ebomaf pre-financed part of the seed of the project, it had to be reimbursed. At the same time, according to Guinean officials, the International Monetary Fund (IMF) demanded to suspend the financing of this budget-intensive project which cost more than 300 million dollars, otherwise Guinea would be deprived of the review with the Extended Credit Facility (ECF). ) in 2014. According to the government, this is the reason that prompted it to abandon the project, considering that the country had more to lose by no longer benefiting from the IMF discharge for other financing if ever it was failed by the IMF because of this project. The former Minister of Public Works, Moustapha Naité, who is, it should be noted, posterior to this management, admitted last year that part of the seed funding had been mobilized by Ebomaf, but he did not not defined to what extent the Burkinabè company had pre-financed this seed.

It appears that the Ebomaf case would have bypassed all the ordinary financial payment due diligence procedures, benefiting from an exceptional procedure, generally granted for the expenses of the armed forces or State sovereignty (payment authorizations, PA) and all within an extra-budgetary framework which distorted the forecasts of the finance law. Recognized as close to African presidential circles and repeatedly accused by the Guinean opposition of colliding with the presidential galaxy, Mahamadou Bonkoungou pocketed through his company Ebomaf, in total, thanks to these exceptional payment procedures, the trifle of $ 185 million on BND for work never done. The Guinean opposition will even denounce overbilling mechanisms (the square km would have been billed up to 1.5 million euros).

At the time, Fodé Oussou Fofana, vice-president of the main Guinean opposition party, the UFDG, revealed that this “financial mismanagement” had at the time had consequences for public finance. “