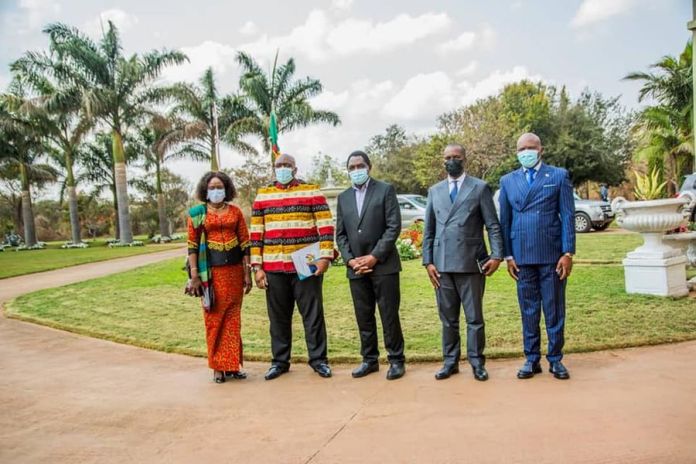 On the eve of Hakainde Hichilema’s inauguration ceremony, the President of the DRC, Felix Tshisekedi, also current president of the African Union (AU), sent envoys with a message to the newly elected president. from Zambia.

Indeed, the delegation made up of the principal adviser, Christian Bushiri, in charge of diplomatic questions, Claude Ibalanki, coordinator of the mechanism of the Addis Ababa agreements, Serge Tshibangu, representative of President Tshisekedi assisted by the Ambassador of the DRC from Zambia was dispatched to Lusaka to carry a message, the content of which has not been made public. She was received by President-elect Hakainde Hichilema on Monday August 23 at his private residence.

The new president of Zambia said on his Facebook account that he had received the delegation of special envoys from President Félix Antoine Tshisekedi Tshilombo, specifying that the Democratic Republic of the Congo and Zambia, two neighboring countries, have a common past and that they will all watch together so that the relations of brotherhood between the two peoples remain excellent and in good shape.

“We discussed a wide range of issues that are of great value to both countries. We will ensure that Zambia is not only a landlocked country, but also a linked territory, ”said Hakainde Hichilema.

President Tshisekedi, guarantor of African cohesion in his capacity as current president of the African Union, wishes to dispel the cold that there had been a year ago during an intrusion by the Zambian army in Congolese territory. It was in this context that he sent envoys to the new president shortly before he officially took office in order to maintain and consolidate good neighborly relations.

According to our sources, the Congolese head of state will also be present at the swearing-in ceremony of President-elect Hakainde Hichilema on Tuesday. He just landed in Lussaka according to the latest news.

Kabila, Katumbi, Fayulu…, all wind up against Félix Tshisekedi in the DRC

Three months later: how did Felix Tshisekedi succeed in establishing his legitimacy without government?