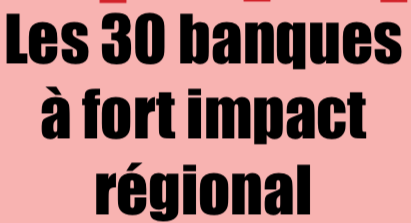 The ranking of the top 30 African banks, determined from the total balance sheet, market capitalization, outstanding loans and deposits, GNP and, above all, African expansion (sufficiently overweighted), does not claim to be exhaustive. This is an affirmed bias in favor of institutions that invest outside their countries of origin, thereby contributing to increasing inter-African flows. The second bias represents the bet of transparency. Listed companies are favored by our barometer because we believe that not going public these days is a major obstacle to transparency and the modernization of the financial sector. In short, this Financial Afrik ranking offers a reading grid on the banks with the greatest regional impact.

The result obtained after a long work of compilations reveals a pan-African competition between South African banks, Moroccans and Nigerians. The banks in these three countries have the largest number of branches and therefore serve the most customers across the continent. Having with them the birthright for an average age of over a century, the South Africans represented in this top 30 surf an innovative and diversified economy, ranging from the mining sector to the agricultural sector, then to industry and services . Standard Bank remains by far the number one in this ranking, ahead of FirstRand, Absa and Nedbank. Moroccan banks follow, ahead in terms of total balance sheet but (this is an already long-standing trend) overtaking South Africans in the diversity of their African networks. The magical trio Attijariwafa Bank, BCP and BMCE Bank Of Africa now extends beyond the French-speaking area. The takeover of Barclays Egypt by Attijariwafa bank in 2017 is part of this dynamic. As for the Nigerian banks, they remain timid in the French-speaking zone where they continue to alternate acquisitions and disposals. The sale, at the end of 2017, of Diamond Bank to NSIA Bank is a good illustration of this trend.

It emerges from our various investigations that African banks of all sizes are apprehending the AfCFTA with high hopes. On condition, they repeat in chorus, that the public decision-makers responsible for the negotiations couple the continental project with the harmonization of the rule of law, sureties and, among other things, mortgages. Beyond the behemoths, this Financial Afrik ranking sheds light on the growth of “native” banks like Coris Bank International in Burkina Faso, Afriland First Bank in Cameroon, the BGFIBank Group in Gabon or even NSIA Banque en Côte ivory. The history of these “endogenous” banks bears witness to the strong intra-regional dynamics between African countries. The UEMOA zones in West Africa and CEMAC in Central Africa are expected to attract more banking investments in the years to come thanks to their comparative advantage of having a single banking rule common to several countries. With the Covid-19 pandemic, the UEMOA zone adopted several strong measures allowing banks to maintain their level of activity by meeting the needs of States. In Central Africa, similar measures have also been taken, testifying, on both sides, of the resilience of the two CFA sub-zones. Overall, African banks face strong demands for financing the economy and the scarcity of foreign exchange. Thus, more than 60 years after independence, the dependence of the African banking sector on foreign correspondent banks constitutes the major weakness of international trade financing.

If geographic diversification is a factor of resilience in times of pandemic, in order to consolidate it, it should have a first-rate bank capable of confirming commitments. Hence the importance of the extension recently obtained from the banking license of BGFI Europe. The Covid-19 pandemic has clearly shown that having a strong banking sector contributes to economic sovereignty. According to a report from Afreximbank, the number of correspondent relationships has declined across the region and rejection of letter of credit applications has increased, by around 38% for local / private banks and 30% for local / private banks. foreign banks. It goes without saying that the primary role of the banking sector remains the financing of the economy. Most of the banks included in this ranking have a conversion rate of around 80%, or even 100%. The transformation of deposit into credit constitutes the banking expertise par excellence. When it comes to trends, they are of several kinds. We believe that the next big upheaval in the African banking sector will come from leading economies like Angola, Algeria and Ethiopia. If the External Bank of Algeria (BEA) remains powerful by its assets, it still suffers from the absence on the pan-African scene. Similar situation for the Commercial Bank Of Ethiopia, a juggernaut inherited from Ethiopian socialism and which today tries to adopt as best it can the principles of the market economy. Angola is also expected to privatize its banks backed by oil manna.

Several times announced, several times postponed, the operation remains subject to the political will of the government. In short, the African banking sector remains attractive with competitive levels of return on investment and lower entry tickets compared to Asia and the countries of the North. It now remains to go in depth towards raising the availability of banking services (15 to 20%), the financing of SMEs and the real economy. The adoption of new core banking systems is revolutionizing customer relations. We believe that the technological upheavals in the distribution channel for banking services are in themselves good news. Thanks to the smartphone, customer acquisition costs have dropped significantly. Branchless banking and mobile banking services reduce the cost of intermediation with small customers and allow deposit collection at lower cost, while freeing branch networks from some pressure, allowing them to meet the needs of professionals and self-employed workers. These 30 African banks with a strong regional impact are the vectors of Afro-African renewal. It remains for politicians to adjust regulations in order to promote banking investment and hence the financing of the economy.

–The network –country: 2 points per country