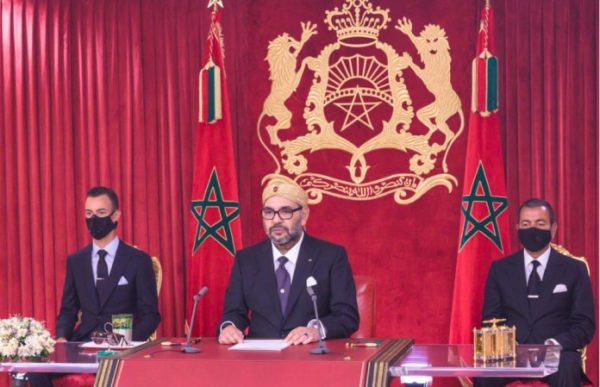 In his 22nd speech on the Feast of the Throne, His Majesty King Mohammed VI wishes to take Morocco to a new stage. Internally, through the establishment of a “national development pact”, while continuing the fight against the COVID-19 pandemic. At the external level, through a proximity approach with Algeria.

an ongoing fight against the COVID-19 pandemic

As the Kingdom continues its fight against the spread of Covid-19, the King did not fail to note the complexity of the context, which imposed the adoption of difficult measures.

The COVID-19 pandemic has left a negative impact on projects and economic activities and on the material and social situation of many citizens, which has prompted, according to the Sovereign, the establishment of a special fund and ambitious economic recovery plan, intended to support small and medium-sized enterprises affected by the crisis, through the creation of a Mohammed VI Investment Fund, the objective of which is to restart productive activities, to support and finance the various investment projects.

In the same sense, His Majesty congratulated the national vaccination campaign, as an essential component of the strategic security of the country, in addition to the important project concerning the manufacture of vaccines, drugs and medical equipment, essential for Morocco.

However, let us remember that the pandemic remains and that the crisis is not yet over. This is the reason why we must all remain vigilant, by constantly attaching ourselves to respect for the instructions issued by the public authorities.

Occasionally; Mohammed VI reiterated his consideration to all actors in the health sector, public, private and military, as well as to security forces and public authorities for their high sense of responsibility and their dedication in the fight against the COVID 19 pandemic. : those who were on the front line in the fight against the pandemic. Civilian and military health personnel, Royal Armed Forces, Royal Gendarmerie, agents and auxiliaries of authority, National security, Auxiliary forces, Civil protection, working with awareness, discipline and responsibility.

A national pact for development

Created two years ago by King Mohammed VI, the Special Commission on the Development Model presented its work. His Majesty gave a great place to this work in his speech, believing that the implementation is a national responsibility requiring the mobilization of the potential of the Nation and the involvement of all its skills.

In this context, the Sovereign reviewed the National Development Pact as a reference framework for defining the country’s principles and priorities for future development.

Remember that this pact proposed by the CSMD and validated by the Sovereign will engage development actors: political parties, constitutional institutions, private sector, local authorities, etc.

A hand extended to Algeria

The sovereign reaffirms his new proximity to his Algerian neighbor, by renewing his sincere commitment to keep a hand extended to work together and without conditions for the establishment of bilateral relations based on trust, dialogue and good neighborliness and that the borders are and remain open.

His Majesty is very aware of the bonds of brotherhood and good neighborliness which have always united the two fraternal peoples, moreover, the common destiny of the two countries. Any instability in one country automatically affects the other. In addition, the security and stability of Algeria are priorities for Moroccan foreign policy.

This is why the Sovereign reassured, in his speech, the neighbor to the East to have nothing to fear from the malevolence on the part of Morocco which is in no way a danger or a threat to Algeria. .