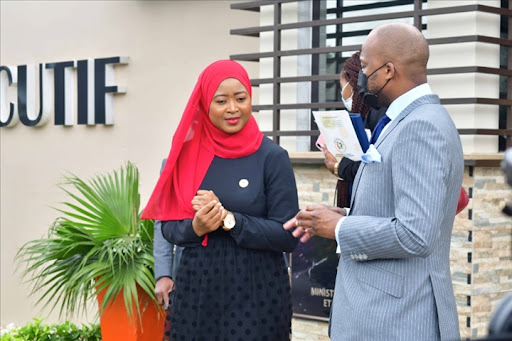 The Secretary General of the African Continental Free Trade Area (Zlecaf), Wamkele Mené, congratulated the work of the Ivorian national committee headed by Fatoumata Fofana, this Tuesday, July 27, during a visit to the premises of the Ivorian representation in Abidjan.

For Wamkele Mené, Côte d’Ivoire is on the right track in the context of the implementation of this regional integration instrument. A consequence, according to him, of the actions carried out by the national executive secretary and her team. Namely the promotion of the agreement at the national level, the contribution to the development of national strategies, the contribution to the strengthening of national expertise on the Zlecaf, and the collection of proposals from national actors for a better participation in the Zlecaf. agreement, among others.

South Africa has therefore invited Côte d’Ivoire to present next month, at the meeting of senior trade officials, the progress of its work which will serve as a model and inspiration for other countries.

The Ivory Coast was the 9th country to ratify the Zlecaf agreement, which should lead to the liberalization of the goods and services market in Africa with the elimination of tariff and non-tariff barriers to trade. This market of 1.3 billion people has theoretically entered into force since January 2021.

On the sidelines of a day of explanation of the content of these agreements organized on June 23 for economic operators in Abidjan, the executive director of the General Confederation of Businesses of Côte d’Ivoire (Cgeci), Stéphane Aka Anghui , had indicated that the texts and documents of the Zlecaf were still unavailable.