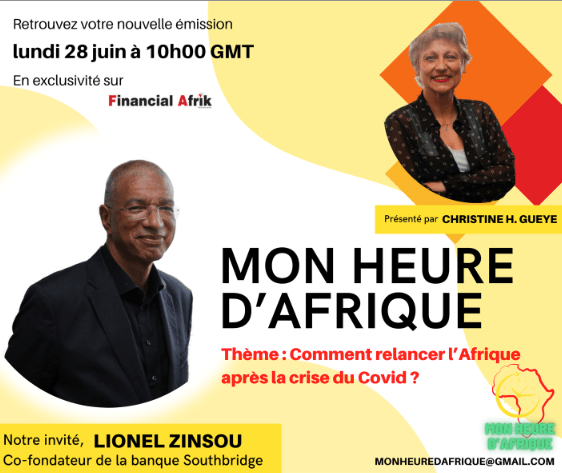 Paris, June 23, 2021 – The first issue of “Mon Heure d’Afrique” will be broadcast on Monday, June 28 at 10 a.m. GMT on the TV channel of the Financial Afrik group. The Franco-Beninese economist and former Prime Minister, Lionel Zinsou, co-founder of the pan-African bank SouthBridge, is the guest. The theme chosen for this program, broadcast in partnership with the Financial Afrik group, focuses on short, medium and long-term solutions to restart African economies after the Covid-19 health crisis that brought the planet to a halt.

For an hour, Lionel Zinsou is questioned on the major current issues (vaccines, the broadcast of Special Drawing Rights, the advent of the ECO, etc.) based on the broadcast of three film reports. Before being challenged by two experts, recognized in their field of expertise, on the issue of African debt and the terms of trade between Africa and Europe, particularly in the context of the establishment of the Zlecaf, as well as on the need to accelerate the industrialization of the continent. In the role of the experts for this first issue of “Mon Heure d’Afrique” are the Franco-Moroccan Anouar Hassoune, managing director of WARA, an African rating agency specializing in sovereign debt, and Claude Fischer Herzog, president of ASCPE European and Euro-African talks.

Designed and produced by journalist Christine Holzbauer (Gueye), this new show entirely dedicated to Africa, with an African point of view, is filmed from Paris. At a time when the relationship between the continent and France is at its lowest, the bet is daring. “At the end of the show, my distinguished African guests must choose and say whether the relationship between Africa and France is hated or blessed. But, in both cases, it’s how they think this relationship should evolve that interests us the most, “says the producer of” Mon Heure d’Afrique. Surrounded by an entirely African team, this specialist in West and Central Africa has traveled the continent as a correspondent for major French newspapers from Bamako (Mali) and Dakar (Senegal), where she has lived for over fifteen years. In parallel with the show she produces, direct and presents, she has created an eponymous association. Aimed at promoting freedom of expression in Africa and in the African diasporas through the audiovisual sector, the association MON HEURE d’AFRIQUE aims to organize training for Image Reporter Journalists (JRI) as well as seminars to help young people fight against fake news in social networks.