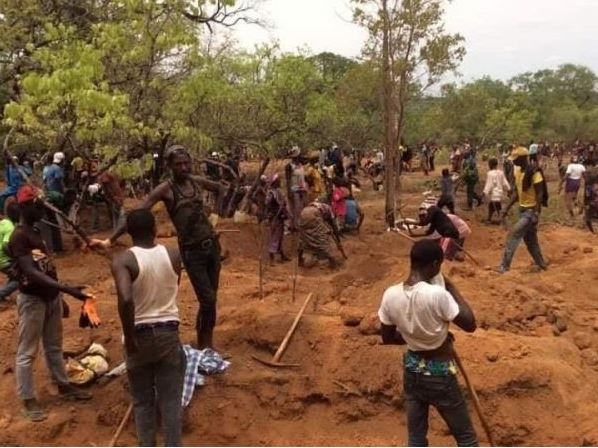 Kounsitel, a little over 18,000 inhabitants, is a peaceful village and one of the seven rural communes of the Gaoual prefecture located in the north-west of Guinea, just over 378 km from Conakry. Anchored in Fouta Djallon, the locality comes under the administrative region of Boké. The annual rainfall oscillates around 1,900 mm, which makes the locality an agricultural area par excellence. In fact, the populations of the Kounsitel sub-prefecture are straddling livestock, which is the main activity of the region, and is also recognized as being the first in Guinea in this area and agricultural and commercial activities. The basement of the Gaoual prefecture conceals important deposits of bauxite and iron. Showings of copper, zinc, tin, nickel, cobalt, arsenic, mercury as well as gold were detected. All these underground reserves still remain untapped. Apart from a few companies in the exploration or development phases such as Alliance Mining Commodies (AMC), nothing impressive, a classic Guinean prefecture with a rich subsoil, straddling the Fouta Djallon and the maritime coast. But the life of the peaceful populations of the town of Konsitel will change on June 4, 2021. A look back at the unprecedented gold fever that has gripped Guineans in recent days and which has rightly or rightly propelled Gaoual onto the scene national as a gold prefecture.

A human surge, a tidal wave, a raid, an invasion, etc … no superlative is too much to accurately portray the events that have been unfolding at this very moment in this locality for the past ten days. Information that circulated like wildfire via social media and word-of-mouth announcing the discovery of a new gold mine in “Kounsitel” has sparked an unprecedented human surge. Within 72 hours, more than 8,000 people had reached the town. Coming from all walks of life, mainly from the prefectures of Upper Guinea: Kankan, Kouroussa, Dinguiraye, Mandiana, and particularly Siguiri which houses another infamous artisanal mine in the locality of “Kintinian” in the prefecture of Siguiri where the environmental drama, human and social speak for themselves, with consequences on the schooling of young boys and girls, prostitution, smuggling, crime, the spread of HIV / AIDS, and other sexually transmitted diseases, etc … others are coming. Mamou on average Guinea, Kindia, Boké, Kamsar (industrial city housing the CBG) in lower Guinea… in short, all of Guinea is represented. These gold hunters, some of whom have traveled hundreds, even thousands of kilometers (Senegal, Mali, Guinea Bissau, Burkina Faso, Sierra Leoneans, etc.) will stop at nothing.

The authorities overwhelmed by the scale of the migratory wave

Not being prepared for such a surge, the administrative authorities of the Labé region where thousands of gold hunters pass through every day who rush on motorcycles, minibuses and trucks on “Kounsitel” were so overwhelmed that they were overwhelmed. erected checkpoints at the entrance to the city, involving the soldiers of the “Alpha Yaya Diallo” camp. We even witnessed a crisis of administrative leadership between the governor of the military region of Boké from which Gaoual and the sub-prefecture of “Kounsitel” and the governor of the military region of Labé through which passes most of the waves of war. ‘arrivals. This reveals a certain panic in the management of the current crisis. Better, “kounsitel” would sharpen the lust of even the most senior.

It was without counting on the determination of the gold hunters of another kind who swelled the ranks of the first arrivals and who were not in the least impressed by these checkpoints. Completely overwhelmed, the soldiers finally let the human surge continue its journey towards the “Kounsitel” mine. The Guinean authorities, having not reacted to the start of this madness for gold, found themselves very quickly overwhelmed by the scale of the migratory wave and finally found no other means than to deploy military units in the area. and to announce the closure of the mine which already looked like in the space of 24 hours in a real battlefield: stripped lands, the environment and the devastated fields and turning upside down, stolen cattle, etc… On the social plan, the course of the life of the peaceful village has changed in the space of a few hours: absenteeism in schools, desertion of commerce in the city center for the “mine”, explosion of the cost of transport, rise in price consumer goods, etc… all the ingredients of chaos and anarchy with their corollaries are there. As far as Gaoualkas can remember, they had never seen this. The last time the Gaoual prefecture received so much attention and made the headlines of all the media was in 1983, the area around Gaoual and Koumbia then experienced an earthquake with a magnitude of 6 ° approximately on the richter scale. 143 deaths had been recorded there. The worst seismic event in recent Guinean history.

Almost a week after the start of this uncontrolled and savage gold rush, “Kounsitel” now looks like “No Mans Land”. The first report shows 6 dead and several injured (caused by accidents). The exasperated inhabitants complain about the disappearance of their cattle, their devastated fields and all the consequences linked to the upheaval of social life in “Kounsitel” by the uncontrolled arrival of thousands of people in record time, and who have invested every nook and cranny of the country and sleep all over the city on the ground.

The arrival of a human tide in a context of double health crisis (COVID-19 and Ebola resurgence) in violation of all the most basic rules in terms of barrier gestures, represents a big snub for the National Security Agency (ANSS), engaged on a double front in the fight against the Covid-19 pandemic and the resurgence of Ebola in the south-east of the country. While Guinea has recorded encouraging results in recent months which have led the authorities to reopen public establishments such as hotels and restaurants, the contamination rate is likely to rise again. Kounsitel saw the equivalent of half of its population sweep over it, causing overcrowding with worrying humanitarian consequences, because the small town of Kounsitel not only does not have the hospital capacity to take care of these thousands of minors, even less of the real estate capacity to accommodate everyone. The health risk is alarming, because there are still thousands of people who remain stranded in this locality, refusing to return to where they come from and sometimes to obey the injunctions of the authorities to suspend the exploitation of gold and who stubbornly go underground.

Moreover, the uncontrolled arrival of foreign nationals from, among others, Côte d’Ivoire and Burkina Faso, to operate in Guinean mines is perceived as a real security risk for Guinea. Countries plagued by jihadist attacks from the Islamic State or Boko Haram and Alqaida in the Islamic Maghreb. The concern of the local populations is linked to the uncontrolled movements which are conducive to infiltration. Upper Guinea is already sufficiently confronted with this kind of situation. Engaged in Mali within Minusma in the fight against terrorism, Guinea, until then spared, is playing with fire by minimizing the uncontrolled arrival of foreigners on its soil, which can constitute a real security risk for it.

The third risk linked to this unprecedented gold fever that has gripped “Kounsitel” is the risk of clashes between indigenous communities and gold hunters perceived by local populations, according to the testimonies of local populations, like invaders respecting no principle. Destroying plantation fields, stealing livestock and disrupting the normal course of their lives and activities of herding, farming and trading. Several skirmishes have already been reported there.

The Guinean authorities at the highest level must take urgent measures to eliminate these risks to avoid a spiral that could lead to uncontrollable situations. Temporarily shutting down the mine and deploying the army, gendarmerie and police is a first step, but it is insufficient. It would be necessary to organize and take charge of the repatriation to their respective localities of displaced persons who, for the most part, left all their savings there, possibly after their systematic check to identify the people there. Maintaining their wild and makeshift encampment and reopening the mine should be ruled out for the time being. Time for the government to repatriate the displaced and take control of the site in order to assess the feasibility and the risks linked to the opening of an artisanal mine in this locality so as not to repeat the same mistakes as in “kintinian In Siguiri. Awareness must be a key element in this recovery.

If the mine has to be opened up to artisanal mining, the time should be taken to organize, analyze and include in the reopening plan all aspects, particularly security, the impact on local social life, education and especially the relevance of the cohabitation between agricultural activities, breeding which represent the main activities of the inhabitants of the prefecture of Gaoual and the mine of “Kounsitel” in question.

More generally, the Guinean government should ensure the application of the texts regulating the exploitation of artisanal mines which, for the moment, resemble American fars west.

Albert Savana
Guinée the country the gold rush the northwest