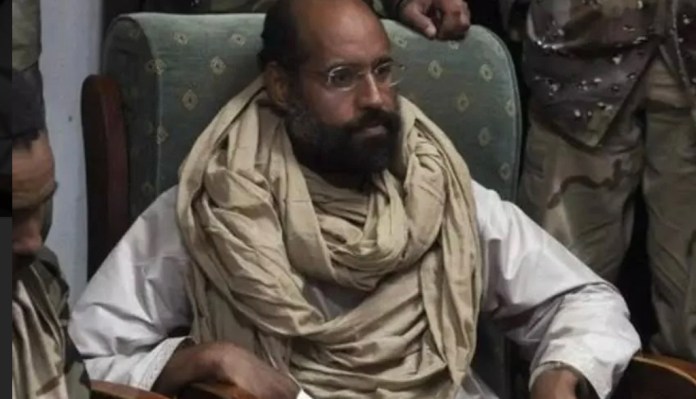 According to exclusive information from Financial Afrik, Seif al-Islam Gadhafi, 48, is organizing with his teams away from the cameras to announce his comeback on the Libyan political scene. Putative dolphin of his father, the guide Muammar Gaddafi, killed in 2011, at the crest of the wave of the Arab Spring, Seif al-Islam Gadhafi has come a long way.

Miraculously from Libyan jails at the cost of tribal alliances and counter-alliances, the most famous of Gaddafi’s sons has every intention of running in the next presidential election, scheduled for December 24, 2021, his relatives reveal to us.

In view of this candidacy, emissaries crisscross the African capitals in missi dominici to convey the message of the Guide’s youngest son to certain heads of state. Saif Al-Islam Gaddafi will make a public statement in the coming days.

Sentenced to death by a court in Zenten, northwest Libya before being released, it has been almost ten years since Guide Muammar Gaddafi’s most political child has been seen in public. The last time was when his father fell, in 2011 followed by his arrest by the Katibat Abou Bakr al-Seddik militia or, by videoconference, in June 2014, during his trial, denounced as expeditious by the UN. and NGOs.

Sentenced to death in 2015, he was released in 2017 by the same militia who arrested him (in the name of an amnesty law promulgated in 2015 by the Parliament established in the east of the country) but lives in hiding like us. specified above.

Saif Al-Islam Gaddafi remains under a double international arrest warrant. One, issued by the Libyan authorities in Tripoli, the other by the International Criminal Court (ICC), which prosecutes him for crimes against humanity.

Despite his journey through the desert, Saif Al-Islam Gaddafi remains popular in several regions of Libya and still has powerful networks in the Middle East, Asia and Africa where his companies continue to do business.

According to generally well-informed sources, Saif Al-Islam possesses the numbers of certain secret bank accounts where the dividends of investments made in his father’s name by his financial networks fall. From his release in 2017, the son of Gaddafi already announced the colors in front of the leaders of the Libyan tribes in these terms: “I am free and I would like to contribute in the future to the establishment of peace and security. sustainable in Libya. I would also like to contribute to the unification of the Libyan people. ” A sort of declaration of a social project completed by the political and ideological line defined as follows: “I will never give up my father’s mission, the one why he is no longer with us today. I am young and formatted for the same mission !! this mission leading to freedom and human dignity. May African youth be sure that the memory of my father will not be betrayed ”. Like his father, Saif Al-Islam shows more interest in Africa rather than an Arab world where his father’s revolutionary proselytizing has always bothered crowned heads.

In any case, the announced return of Saif Al-Islam Gaddafi will cut the cards in the political spectrum of the country and in the geopolitical reading of Libya, from Moscow to Washington via Paris, London and Ankara. In early 2021, the new US administration led by Joe Biden maintained sanctions against Seif Al Islam and others close to Muammar Gaddafi for a year.

Exclusive: the SUNU Group announces the exit of Sanlam from its capital and the merger of its West African activities in Senegal

Exclusive interview with Pathé Dione, CEO of the SUNU Group