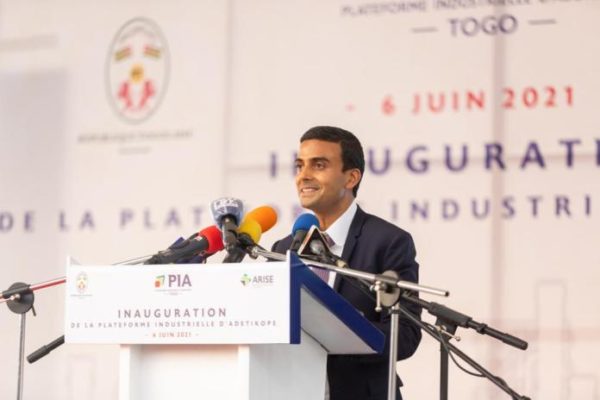 Inaugurated on June 6 by the Togolese head of state, Faure Gnassingbé, the Adétikopé industrial platform (PIA) is a major milestone in the country’s development policy, which it aims to transform into an industrial hub. Close-up on this PPP model which, after having proved its worth in Gabon, has already been replicated in Benin under the leadership of ARISE IIP, developer of special economic zones in Africa.

ARISE IIP, which is at the helm of these three mega-projects in partnership with host country governments, is a joint venture between Olam (49.5%) and the multilateral financial institution AFC (50.5%). It comes from the company ARISE launched in Gabon in 2010 in order to find innovative industrial, logistics and port solutions “made in Africa”. At the end of 2019, its activity was reorganized into three separate entities dedicated to port activity (Ports & Logistics – P&L), special economic zones (Integrated Industrial Platforms – IIP) and infrastructure (Infrastructure services – IS).

In Adétikopé, ARISE IIP kept the ingredients of its winning recipe: a PPP with the government, within the framework of the National Development Plan; specialization in competitive local raw materials, a “customer-centric” layout, a secure environment, efficient logistics, reliable and cheap energy, to which are added a guaranteed supply of raw materials and an incentive tax environment. In fact, to constitute a framework conducive to the establishment of local businesses and attract FDI, these areas require a clear, stable legal and fiscal framework, tax exemptions and reductions as well as an efficient administrative single window.

“PIA is another opportunity for ARISE IIP to showcase its industrial development model, a model that generates mutual gains through the sustainable and ethical transformation of natural resources. PIA’s success also lies in a successful partnership with the Togolese Republic, which has put in place the regulatory framework necessary to promote industrialization ”, underlined Gagan Gupta, co-founder of ARISE IIP, on the occasion of the inauguration of the first phase of this industrial zone.

The economic model of this ecosystem corresponds to what many experts consider necessary for the development of sub-Saharan countries: investments from a profitable private sector in a local industry with high added value, made possible by the creation of infrastructure, integrated logistics services to increase competitiveness; and investor-friendly regulations. With a threefold objective: to attract large-scale projects, secure foreign investment and encourage development, while making a strong contribution to “local content”.

In Gabon, with an investment of 425M USD, the strategy of valuing the forest windfall has borne fruit thanks to a very complete logistics ecosystem, wood storage and treatment facilities, as well as ancillary services in the industrial zone. This has enabled the country to move from being a log exporter to that of Africa’s largest exporter and the world’s second-largest veneer producer. Since its launch, this SEZ has attracted 120 investors, attracted USD 1.7 billion in foreign investment and contributed to the creation of 16,000 jobs.

In Benin, the expectations aroused by the Glo-Djigbé industrial platform, which aims to become a hub for the processing of agricultural products from Benin, are immense: an increase in exports of 5 to 10 billion USD and an increase in GDP of 4 to 7 billion USD within ten years. In Togo, thanks in particular to the creation of a competitive ecosystem for the processing of cotton and agricultural products, the platform will play a catalytic role to support economic growth, regional integration and trade and it will allow the creation of some 35 000 jobs.