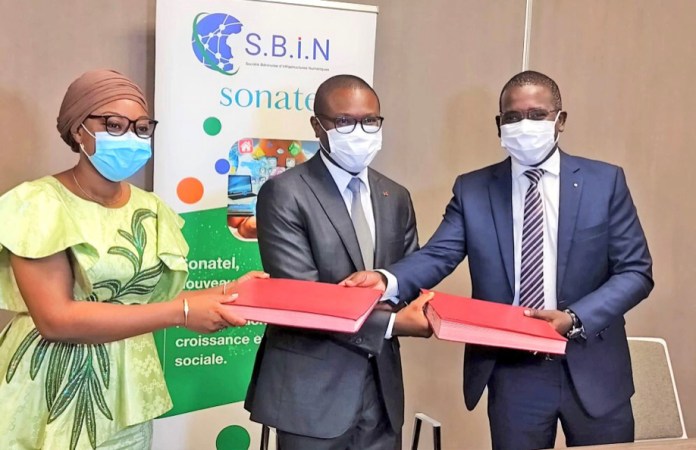 On Friday May 21, 2021, the government of the Republic of Benin and the SONATEL group formalized the delegated management of the Société Béninoise d’Infrastructures Numériques (SBIN) SA The official signing ceremony of the delegated management agreement, was co-chaired by the Minister of the Economy and Finance, Mr. Romuald WADAGNI, the Minister of Digital and Digitization, Mrs. Aurelie ADAM SOULE ZOUMAROU and the Special Advisor to the President of the Republic, Mr. Johannes DAGNON, we read on the official website of the government of Benin.

Mr. Marc-André LOKO, outgoing CEO of SBIN SA, recalled the many projects successfully undertaken in recent months and wished the new team to pursue the other major ambitions nurtured by SBIN SA, in particular the development of mobile services. .

Mr. Sekou DRAME, Managing Director of SONATEL, reassured of the Group’s commitment to contribute to the realization of the vision of the Head of State, His Excellency Mr. Patrice TALON to make Benin the digital services platform for Africa of the West for the acceleration of growth and social inclusion. “The SONATEL group aims to provide SBIN with all its expertise and dynamism in terms of innovation, operational excellence and the development of the digital ecosystem. », He continued.

Through the delegated management mechanism, the State of Benin makes SONATEL its strategic partner for improving the quality of SBIN services. The objective is to make SBIN a major operator of fixed and mobile services in Benin and subsequently in the sub-region.

For the Minister of Digital and Digitization, Mrs. Aurelie ADAM SOULE ZOUMAROU, the signing of the delegated management agreement of SBIN, marks a turning point in the management of the digital sector in Benin. “The signing of the agreement marks the beginning of another path, one which will lead to the establishment, in accordance with the government’s vision, of a robust society, which will provide the populations of Benin with digital services, innovative and of high quality, ”added the Minister of Digital and Digitalization.

“Our desire is simple: to make SBIN the catalyst for Benin’s digital ecosystem. “, It is this objective which, according to the Minister of the Economy and Finance, Mr. Romuald WADAGNI, led the government to choose the delegated management of the SBIN. “On the one hand, we want you to revitalize the digital sector in Benin by bringing value to all stakeholders and on the other hand, to make the place of Cotonou, the one from which innovations in terms of ‘digital uses, for Africa,’ he insisted. Minister Romuald WADAGNI ended by reassuring the SONATEL Group of the government’s unwavering support for the achievement of the objectives set.

Telecoms: Sonatel repays a debt of 3.250 billion FCFA on July 16