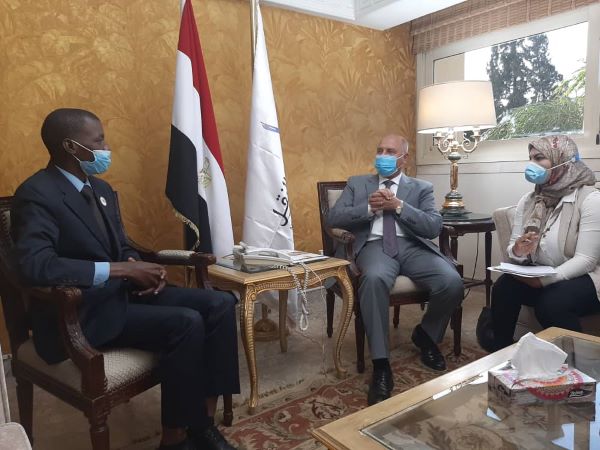 The meeting was attended by representatives of several media from all sub-regions of Africa.

The Selection Committee worked on the basis of the 2021 report made by the Media Network for Infrastructure and Finance in Africa (MIFA). The Selection Committee also took into account the public reports of international institutions and organizations in the field of road and transport in Africa, as well as all the relevant publications available and searchable in the fields considered. It should be remembered that the central theme of this year’s work is: “Roads and transport for health: actions and achievements to meet the challenges in Africa”. This theme is imposed by the context of the global health crisis that the whole world is going through.

At the end of the deliberation work, the Selection Committee adopted the following

SEM. Muhammadu BUHARI, President of the Federal Republic of Nigeria is named Winner of the Great Builder Super Prize – Babacar NDIAYE Trophy 2021. For his personal leadership and for the efforts made to guarantee road safety and the health of populations in the context of transport. The Selection Committee noted the efforts made to improve road safety and air quality for road users. The Committee also commended Nigeria’s work in obtaining vaccines against Covid-19, which should ensure optimal use of the road and transport. Finally, the Selection Committee notes with satisfaction that despite the health crisis, Nigeria has continued to work on major roads and transport, particularly in rail transport.

The Selection Committee extends its warm congratulations to President Muhammadu BUHARI and to the people of Nigeria. The presentation of the trophy will take place in agreement with the Nigerian authorities after the Final Conference scheduled for June 24 on the sidelines of the Annual Meetings of the African Development Bank (AfDB).

The Selection Committee invites all African States to increase the level of their efforts in terms of road safety and more generally in terms of health related to the road and transport.

The Selection Committee salutes the former winners of the Super Prize Grand Bâtisseur – Babacar NDIAYE Trophy. He particularly thanks SEM. Abdel Fattah al-SISI, President of the Arab Republic of Egypt for having accepted the distinction awarded to him in 2020 and above all for having accepted that the Inaugural Conference 2021 be held in Cairo, Egypt. The Selection Committee also thanks the Minister of Transport of Egypt, SEM. Kamel ElWAZEER and all the authorities as well as the Egyptian people for their availability and their commitment to the road and transport.

The Selection Committee thanks the AfDB and its President, Dr Akinwumi ADESINA, for the continuous efforts in favor of road and transport throughout the continent, and for the Sponsorship granted to The Africa Road Builders – Babacar NDIAYE Trophy. Finally, the Selection Committee salutes the memory of Dr Babacar NDIAYE, former President of the AfDB, who inspired this event.