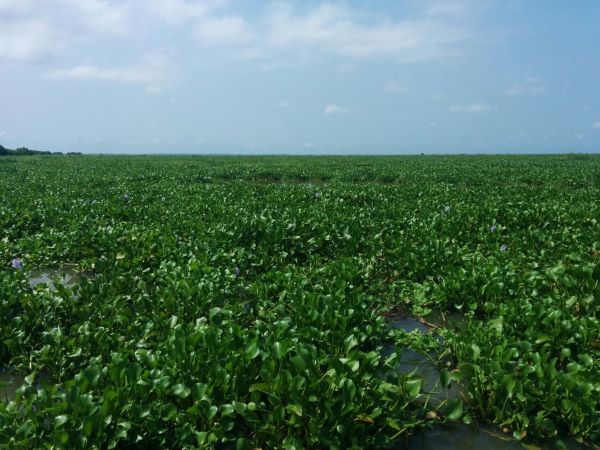 Bénin Terminal signed a partnership agreement in Cotonou on 1 April 2021 with the Beninese start-up Green Keeper Africa. The aim is to roll out GKSORB, the first industrial absorbent produced in Africa using hyacinth water, at its facilities at the Port of Cotonou.

A specialist in innovative and natural pollution-control solutions, Green Keeper Africa has committed to supplying Bénin Terminal over the next two years with 100% organic absorbents to effectively control and manage accidental liquid leaks at the container terminal.

As part of the partnership, Green Keeper Africa will train Bénin Terminal employees on eco-responsible practices. The start-up will also assess the roll-out of the absorbent, recover the oil collected with a view to treatment, and issue recommendations for safeguarding biodiversity at Bénin Terminal.

“This partnership with a major logistics operator stands as recognition for young people in Benin. We are proud to work towards a greener Africa by devising adapted solutions aimed at reducing the impact of industrial pollution,” said Fohla Mouftaou and David Gnonlonfoun, founders of the Green Keeper Africa start-up.
“We are happy to work with a Beninese company and local partners, which use national resources with no impact on the country’s ecosystem. This boosts the efficiency of our processes and contains pollution at our facilities to preserve the environment,” said Yann Magarian, Managing Director of Bénin Terminal.

Thanks to FCFA 95 billion (€145 million) invested since 2013 by Benin Terminal, the container terminal in the port of Cotonou has become a regional logistics hub for growth for Niger, Mali, Burkina Faso and Nigeria. A major player in the country’s logistics chain, Benin Terminal employs 677 Beninese and is developing a policy of subcontracting that generates a thousand indirect jobs. Benin Terminal also carries out actions for the population in partnership with NGOs, for example supporting the schooling of young people affected by HIV, supporting the empowerment of young people and raising awareness of environmental preservation.