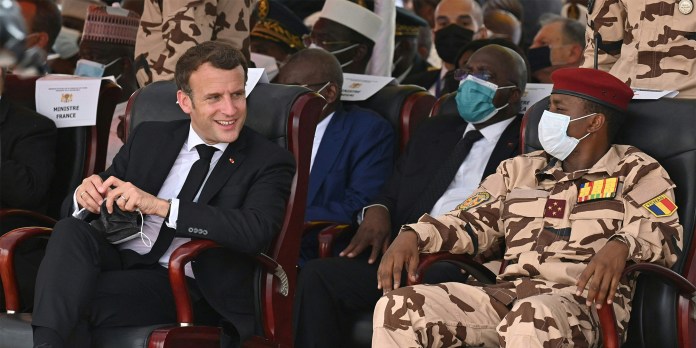 The president of the Transitional Military Council spoke on Tuesday, April 27, 2021, a first since coming to power seven days earlier. His speech comes following the crackdown on a series of protests launched by civil society and the Chadian opposition. Explaining the circumstances which led the Military Council of the Transition (CMT) to take power, General Mahamat Deby believes that this was done following the renunciation of the “President of the National Assembly to assume his charge in his capacity as constitutional dolphin in the face of this imminent peril ”. General Mahat Deby therefore invokes a kind of force majeure making the constitution inapplicable in his letter. “The high dignitaries of our defense and security forces had no other choice but to take the path required of all in this exceptional context of a generalized chaos announced and the implosion of the country” , he declares, alluding to the rebels who threaten to advance on the capital after the death of President Idriss Deby from injuries sustained at the front.

The head of the junta does not, however, give the reasons that Haroun Kabadi, the president of the dissolved parliament, would have put forward for refusing to act as the President of the Republic in accordance with articles 82 and 240 of the relegated Chadian Constitution. in the Sahelian calends. Assuming that the medical reasons Kabadi would have invoked were established, the generals could nevertheless not confine themselves to taking note of them and immediately seize power and then invoke the obvious need to transgress the constitutional order. For on the one hand, the combined provisions of Articles 82 and 240 provide that if the President of the National Assembly is unable to act, the interim is provided by the First Vice-President of the same Assembly. Was the latter consulted? Nothing is less sure. On the other hand, the finding of definitive impediment falls within the competence of the Supreme Court, article 82 of the Constitution tells us.

According to our sources, the high court was not consulted, nor did it validate, within the time limits set by article 73 of the Constitution, the provisional results of the presidential election of April 11, which CMT says it takes note. Separately, a source close to the seraglio claims that President Deby died on April 18 and the announcement of his death was not made public until April 20. “If Deby died in the middle of the electoral process, it is in principle the candidate who came in second position who must be declared elected”, argues our interlocutor. It would therefore be to avoid ending up in this situation that the Chadian army would have forced the electoral commission to proclaim Idriss Deby the winner when in fact he had died the day before. Information undermined by the official thesis.

In his speech, the president of the CMT, explains his “coup” by the imminent peril which threatens his country. Supported by France, Mahamat Deby poses as the savior of a Nation at risk of implosion. If the argument is legally strong from coffee, it remains symptomatic of a Sahelian country where power is above all a balance of power. But unlike his father, the late Idriss Deby, who repelled many rebellions without ever having recourse to the exceptional powers of Article 97, Mahamat Deby appears from the start at odds with the basic text. Will the Chadian people accept the CMT deal? Sucsses Masra, opponent, leader of the Les transformateurs party, replied in the negative. Note that in his speech General Mahamat Deby did not allude to the unrest in the capital and other towns across the country but called for restraint. “Our country is at the crossroads of its history. This crucial moment for the Chadian Nation commits the CMT to show responsibility and balance. No state can prosper in an environment marked by disorder, anarchy and chaos, “he adds. The General pledged to organize an inclusive dialogue during the 18 months of the transition and appealed to the diaspora and exiles to return to the country to take part in the construction of Chad, land of Toumai, ancestor of the humanity.