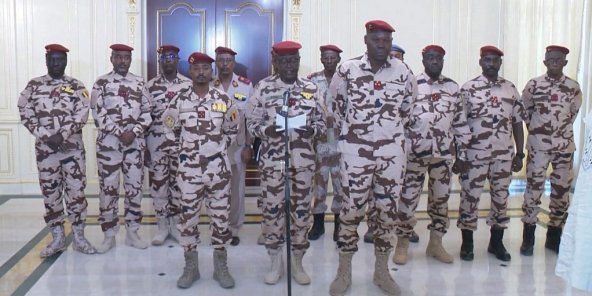 A week after the death of President Idriss Déby Itno, it is difficult to predict the immediate future of Chad. The tragic and brutal disappearance of the man who embodied the sovereign institutions over the past thirty years seems to open a Pandora’s box. Admittedly, the country is ruled by the Transitional Military Council (CMT) made up of about fifteen soldiers who give themselves eighteen months to return to constitutional order.

A deadline that is far from unanimous in Chad, especially since the constitutional mechanisms in the event of vacancies at the head of power provide that it is the president of the senate who acts as the president of the Republic while waiting. the organization of the presidential election within a period not exceeding three months. In other words, what has been happening since April 20, 2021 in Chad is outright a coup d’etat. A putsch that seems curiously recorded by the international community, trampling on the treaties and conventions in the matter.

The resulting internal challenges, including those from the political class led by the democratic opposition and human rights groups, sufficiently demonstrate that the self-proclaimed power following this military passage is dividing the Chadians. In this context, the quest for legitimacy of the “new authorities” constitutes in itself, a perilous step especially as the choice focused on the personality to lead the CMT, Lieutenant General Mahamat Idriss Deby gives the impression of a monarchical succession.

The other and most complex uncertainty is the lack of dialogue between the CMT and the rebels of the Front pour le changer et la concorde au Tchad (FACT), whose fatal wound on Idriss Déby is undoubtedly, a stage victory. The rebels’ slyness to open a dialogue with the CMT is really just a ruse to consolidate their position on the ground. They know that the death of Marshal Idriss Déby dealt a huge blow to the morale of the troops, and that inevitably, real or supposed dissension within the CTM is a psychological advantage for them.

However, the CMT’s steadfastness in battle with the rebels bodes well for a military offensive as “neither mediation nor negotiation with outlaws” is possible. The categorical refusal to engage in dialogue with the rebels and the appeal to the Nigerien authorities for cooperation in capturing FACT leader Mahdi Ali Mahamat sufficiently demonstrates this.

In this context, is there not reason to fear that other rebel movements that roam this country could reorganize and conquer territorial spaces? Can the current situation promote the unity of rebellions whose sole objective will be to overthrow current leaders? Could the feeling of a monarchization of power broaden the rebels’ capital of sympathy with the population who, if necessary, would serve as a relay for the rebels? In other words, are we heading towards an ungovernable situation as was the case some forty years ago when rebellions controlled entire swathes of the national territory?

It’s difficult for now to know exactly what will happen. At most, we know that the social divide will deepen and that the daily difficulties of Chadians will increase. A situation that occurs when the country is going through a difficult socioeconomic situation, a consequence of the fall in oil on the international market and which constitutes the country’s income at more than 80%.

In view of the current tensions, the wish of many Chadians calling on “everyone, including the rebels, all Chadians to sit around a table and talk, negotiate for a lasting solution” would hardly come true. For the belligerents, the solution seems inevitably military. But who from CMT and FACT would be able to win? One thing is certain, however, that Chadians will have a difficult time.