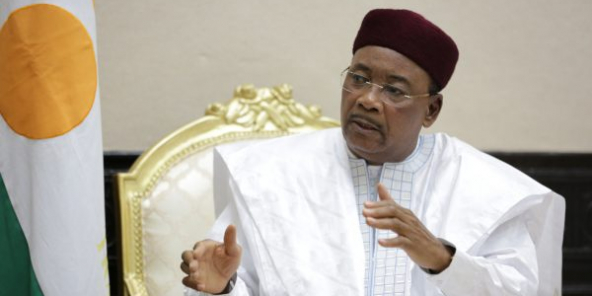 The 2020 Ibrahim Prize for Excellent Leadership in Africa has been awarded to the President of Niger, Mahamadou Issoufou. The Mo Ibrahim Foundation announced the award today, following a meeting of its independent Award Committee.

President Issoufou served two presidential terms, from 2011 to 2020. He is the sixth recipient of the Ibrahim Prize, which rewards and celebrates excellent African leadership. The Ibrahim Prize aims to recognize outstanding leaders who, during their tenure, have developed their country and strengthened democracy and the rule of law for the benefit of all their fellow citizens.

In its quote, the Prize Committee underlines the exceptional leadership of President Issoufou, at the head of one of the poorest countries in the world, facing a series of seemingly insurmountable challenges. Throughout his tenure, he bolstered economic growth for the benefit of his fellow citizens, demonstrated an unwavering commitment to regional stability and tirelessly defended respect for constitutional and democratic rule.

Announcing the decision, President Festus Mogae, Chairman of the Prize Committee and former President of Botswana, said: “In the face of the most serious political and economic problems, including violent extremism and increasing desertification, President Issoufou knew how to lead his fellow citizens on the path of progress. Today, the number of Nigeriens living below the poverty line has fallen to 40%, down from 48% ten years ago. Obviously the challenges remain significant, but President Issoufou has kept his commitments to the Nigerien people and paved the way for a better future. After careful consideration, the Committee considered that President Issoufou is the worthy 2020 winner of the Ibrahim Prize. ”

Mahamadou Issoufou was democratically elected president for the first time in 2011, after many years of military rule in Niger. He was elected for a second term in 2016 and is stepping down on his due date, in full respect of constitutional rule.

Data from the Ibrahim Index of Governance in Africa (IIAG) underscores President Issoufou’s achievements. During its ten years of presidency, Niger has made progress in many areas, notably in each of the four dimensions of the Human Development category – Health, Education, Social protection, Environment. Niger is among the ten African countries that have made the strongest progress in strengthening socio-economic opportunities for women over the past decade.

Taking note of the results of the deliberations of the Prize Committee, Mo Ibrahim, President of the Mo Ibrahim Foundation, said: “I am very happy with the choice of the Prize Committee. President Issoufou is an exceptional leader, who has worked tirelessly for his people, for his country and for his region, facing seemingly immeasurable challenges with courage and determination. I am proud that President Issoufou is recognized as an example of excellent leadership and I hope his journey will inspire many generations of African leaders. ”

The Ibrahim Prize is a ten-year award worth US $ 5 million. It allows the African continent to continue to benefit from the experience and wisdom of its exceptional leaders by giving them the opportunity to pursue civic action on the continent once their national mandate has ended.

Each year, the Ibrahim Prize award committee considers heads of state or government of an African country, who, democratically elected, have left office within the past three years, after having served in office. in accordance with the rule established by the Constitution of their country.