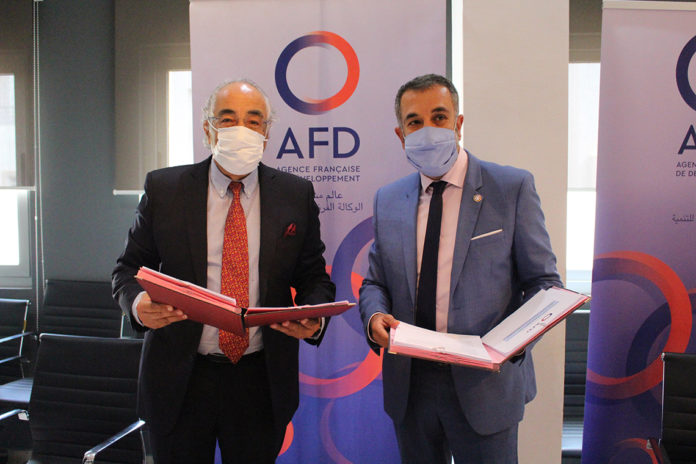 Signature of a new partnership between the French Development Agency and the Sahara and Sahel Observatory for the establishment of a regional initiative: “Water stress and climate change in North Africa”.

North Africa, with a naturally arid or semi-arid climate, is already suffering the effects of climate change such as exacerbated water stress, declining agricultural yields as well as the increase in frequency and the intensity of extreme events. According to a recent report from the Mediterranean Network of Experts in Environment and Climate Change (MedeCC), the area is experiencing an increase in temperatures at a rate 20% higher than global averages, which could, without further action, reach + 2.2 ° C from 2040 and go up to + 3.8 ° C in some regions in 2100.

The AFD Group (Agence Française de Développement) places the resilience of economies and territories at the heart of its strategic priorities in the North Africa region with a desire to continue and strengthen its interventions in favor of the preservation of water resources and development of unconventional resources, to cope with a situation of water stress that is likely to worsen due to the combined effects of human activities and climate change.

The current water stress, set to worsen, could increase the tensions between uses and conventional renewable resources. In this context, it appears particularly appropriate to question the potential contribution of unconventional water resources (in particular the reuse of treated wastewater for agriculture, desalination or demineralization of water and transboundary fossil water) and of detail the conditions and associated best practices, as well as any risks, particularly environmental ones. The regional approach appears to be highly complementary to programs already historically funded in this sector by AFD in North African countries, particularly in Morocco and Tunisia.

It is for these reasons that AFD and the Sahara and Sahel Observatory (OSS), an intergovernmental organization with an African vocation established in Tunis and with recognized expertise on the subject of water resources and climate change in arid and semi-arid zone, have decided to build together the initiative “Water stress and climate change in North Africa”.

This initiative comes within the framework of the Support Facility for Public and Citizen Policy Dialogue funded by AFD and for which a research and partnership agreement was signed on November 5 with the OSS in Tunis.

The objective of this regional initiative will be to fuel the dialogue of public policies in the region (Algeria, Egypt, Libya, Morocco and Tunisia) for a period of 18 months and to encourage the sharing of knowledge at a regional scale on issues and solutions to face these challenges. The initiative will allow the creation of spaces for dialogue on the subject with the production of summary documents by country and at the regional level and the publication of research documents in AFD’s collections.

A high-level exchange workshop will also be organized in Tunis in June 2021. It will mainly target and involve decision-makers from the countries concerned as well as officials at high decision-making levels working within sectoral but also cross-cutting ministries, as well as the scientific community. , civil society and the private sector.

Quote from Julie Gonnet in charge of the program at AFD’s Regional Department in North Africa: “These subjects are particularly relevant for the countries of the region. The increase in temperatures and the relative decrease in precipitation expected according to the climate models of the region should lead to a worsening of the water stress situation, while all the countries are already showing levels of resource availability well below the threshold. of shortage defined by the UN (1,000 m³ / inhabitant / year) and less than 650m3 / year / inhabitant. By working on shared issues, the initiative should promote exchanges, the sharing of knowledge, the dissemination of good practices and innovative solutions favorable to the achievement of sustainable development objectives such as access to water, security. food, the preservation of natural resources and the fight against climate change. It will use the already existing channels of dialogue by linking up with other initiatives already deployed on these themes “.

Quote from Mr. Khatim Kherraz, Executive Secretary of the Sahara and Sahel Observatory:

“The five countries involved in this project are all in a situation of water stress or water scarcity, which climate change will not improve, far from it. It is therefore necessary to explore all avenues that would allow either better management of available conventional resources or the mobilization of additional unconventional resources, with the greatest possible respect for the environment. I am also happy that cooperation between AFD and OSS is developing, in areas that are still too little addressed, to the benefit of our member countries. “

Tunisia: partnership between Financial Afrik and the Kgenci agency