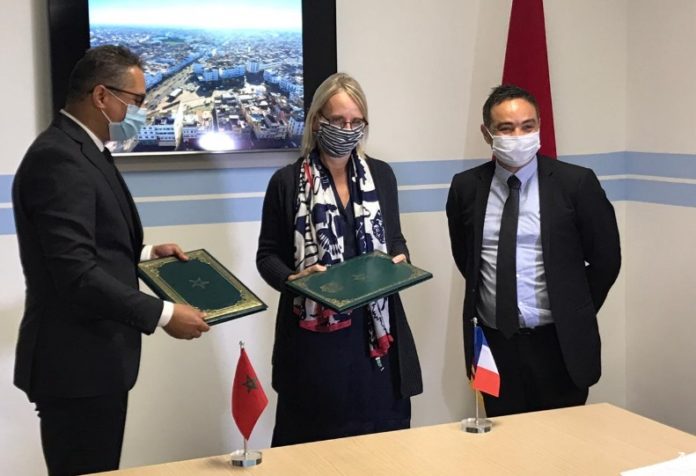 On November 2, 2020, in the presence of HE the Ambassador of France to Morocco, Mrs. Hélène Le Gal, the company Casa Transport en Site Aménagé SA and the French Development Agency (AFD) and signed a loan agreement of 1, 1 billion dirhams (100 million euros), associated with a technical assistance grant of 5.5 million dirhams (500,000 euros). This new financial and technical support from AFD to Casa Transport consolidates the quality of their partnership relations and will (i) expand the public transport offer accessible to as many people as possible, (ii) promote the use of a clean and low-carbon mode of transport and

The technical and financial partnership between Casa Transport and AFD was launched in 2012 with an initial funding of 23 million euros for the construction of the first tram line in the city, followed by a second funding, in 2017 , 30 Million Euros for the realization of the second line. These loans were accompanied by grants of € 1.3 million and € 500,000 to finance strategic studies and technical assistance on the environmental and social aspects.

Today, this partnership has taken a new important step marked by the establishment of a new financing of 100 million euros. “Through this new partnership, AFD is supporting Casa Transport in setting up an efficient and low-carbon transport system that helps provide access to public transport services to as many people as possible, and thus facilitate urban mobility. and access to employment ”notes Hélène LE GAL, Ambassador of France to Morocco.

The promotion of a sustainable and inclusive city also requires an extensive and reinforced public transport network. “The implementation of the T3 and T4 lines constitutes an important step in the implementation of Casablanca’s urban travel plan, the ultimate objective being to offer a quality public transport network, as large as possible and offering efficient intermodality with other modes of transport. »Emphasizes Nabil BELABED, Managing Director of Casa Transport.

The stake of this program also relates to the promotion of gender equality. According to Mihoub MEZOUAGHI, Director of AFD in Morocco: “the project also aims to promote access adapted to people with reduced mobility but also safer access for women to public transport, thus helping to facilitate their greater inclusion. economic and social. Today, the tramway is the preferred mode of public transport for Casablanca women ”. Currently on the T1 and T2 tram lines, 49% of users are women.

AFD sets up the innovation fund for development