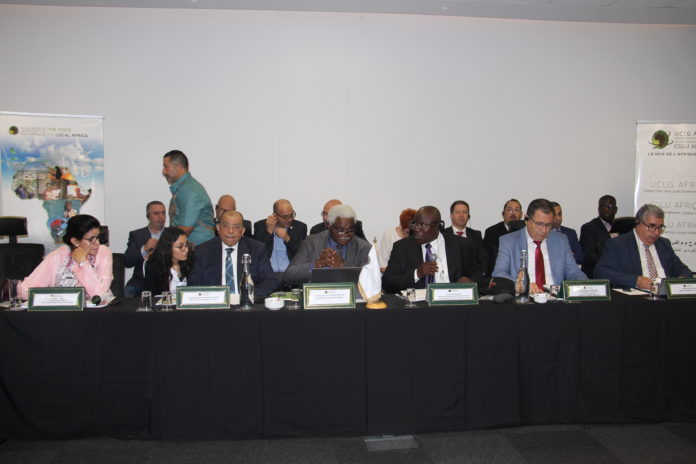 UCLG Africa held its statutory meetings on November 9th, 2019 at Onomo Hotel in Durban, South Africa. The statutory meetings of UCLG Africa included the 22nd session of Executive committee and the meeting of the Pan-African Council. These meetings were held as a prelude to the UCLG World Congress that takes place from November 11th-15th, 2019 in the city of Durban.

The Minister, General Mahmoud Shaarawy and the Governor of the Governorate of Cairo, General Khaled Abdel Aal, reassured the members of the Executive Committee that the UCLG Africa regional office being set up for the North Africa region in Cairo, will be completed by the end of the year. They had also invited UCLG Africa members to participate to the second edition of the African Cities: “Engines of Sustainable Development” conference to be held in June 2020 in Cairo.

The Executive Committee and Pan-African Council members discussed participation in the UCLG Congress where Africa is contesting for the position of UCLG president for the 2019-2022 term. The candidate for Africa is Dr. Mohamed Boudra, Mayor of Al Hoceima, Morocco, President of the Moroccan Association of Local Governments (AMPCC) and Vice president of UCLG Africa for the North Africa Region.

All members of Pan-African Council reaffirmed their full support to Dr. Mohamed Boudra, the sole candidate for Africa. The President of UCLG Africa and the Vice President of REFELA called on all African mayors to mobilize the mayors of their twin cities of other continents to vote for Africa by supporting Dr. Boudra’s candidacy.

« In Africa, women elect men. Our African candidate will be elected. We are committed and all African voices will go to him. We will advocate with other electors to vote for Dr. Boudra “, Mrs. Soham El Wardini, Mayor of Dakar (Senegal), Vice-President of UCLG Africa for the West Africa Region

The UCLG Africa delegates are already fully engaged in the campaign for a final victory. The first part of election is plan on 14th November evening, during the World Assembly of Local and Regional Governments. The second part will be on 15th November 2019.

The members attending the meeting raised the following points:

Leaders of UCLG Africa welcome the liberation of Mr. Khalifa Ababacar Sall, former Mayor of Dakar and former president of the organization. During his two years of incarceration, the support from African Local Governments was unwavering. On 17th April 2018 in Libreville, a specific mention of the support to UCLG Africa’s leader was published in the Declaration of UCLG Africa Region Strategic Meeting for the Central Africa Region.

Motion of support to the Mayor of Bamako

The members of Pan-African Council were also informed about the situation of the Mayor of Bamako (Mali), Adama Sangaré who has arrested and placed under a detention warrant. It was agreed to write a motion of support to Mayor Sangaré and plan for a UCLG Africa delegation to arrange a courtesy visit.

The Leaders of African Local Government also decided to produce a declaration to condemn the terrorist attacks in Burkina Faso and the other African countries such as Cameroon. These attacks have resulted in the death of many people including several Mayors.

It was also highlighted that the next Africities to be held in the city of Kisumu in Kenya from 16th to 23rd of November 2021. The theme for this edition will be “The Role of the Intermediary Cities in the Development of Africa”.

« REFELA wants this campaign for African Cities without Street Children became a world campaign. We should remember the message of the King of Morocco in Africities 2018, It’s a matter of dignity for ourselves if we are not ashamed to have children sleeping in the street« , said Jean Pierre Elong Mbassi, Secretary General of UCLG Africa.

Migration was also one of the key issues on the agenda of development in Africa. Considering the fact that African people move mainly inside the continent, the meetings appealed to Local Authorities to increase the number of the signatory cities for the Charter of Local and Regional Governments of Africa on Migration. Only 30 cities have signed this Charter since its adoption during the 8th edition of Africities summit in Marrakech, November 2018 yet every major city in Africa has to deal with the growing impact of urban population growth through economic migration.

Two meetings were scheduled on the 11th of November at the World Summit of Local and Regional Leaders. The first one is about young African leaders and the drive to establish an African network of young elected officials. The second meeting is The Africa Territorial Agency that aims to establish a financial vehicle to enable Local Authorities to access the financial markets.

ALGA has organized the third edition of the FAMI (African Forum of Territorial Managers and Training Institutes targeting local governments). Several colleges have already been established and 169 officials elected and technical staff of municipalities have been trained including: Localizing the SDGs, Territorial Coaching, Human Capital at local level, Decentralized cooperation and local governance.

Since the decision to endorse the program of African Capitals of Culture, it has worked on three pillars: the strengthening of the department, the advocacy at the local, national, continental and international level and the finalization of the activities of the multi-year program that will see Marrakech awarded the 2020 title of African Cities of Culture 2020-2021.

Territorial Coaching will expand to all the provinces in the Oriental and the Beni Mellal Region in Morocco; as well as breaking into the international scene, around South-South cooperation carried by the Region of the Oriental and the Government of Morocco. This has resulted into the creation of a center for Territorial Coaching in Dakar and in Kaolack in Senegal, and further requests for intervention in the region of the “Nohoum Loop” in Burkina Faso, in San Pedro in Côte d’Ivoire, and in the City of Douala in Cameroon.

After prolonged advocacy and negotiations, UCLG Africa is now part of the climate change ecosystem at the African and global levels. UCLG Africa suggested an innovation to improve the ongoing process of reviewing the Nationally Defined Contributions (NDCs) under the Paris Agreement, namely the adoption of a bottom-up approach based on Locally Determined Conditions (LDCs), following a structured dialogue between the national and territorial levels of government. This approach was considered innovative enough to be presented at the United Nations Climate Summit convened by the Secretary General in September 2019 in New York.