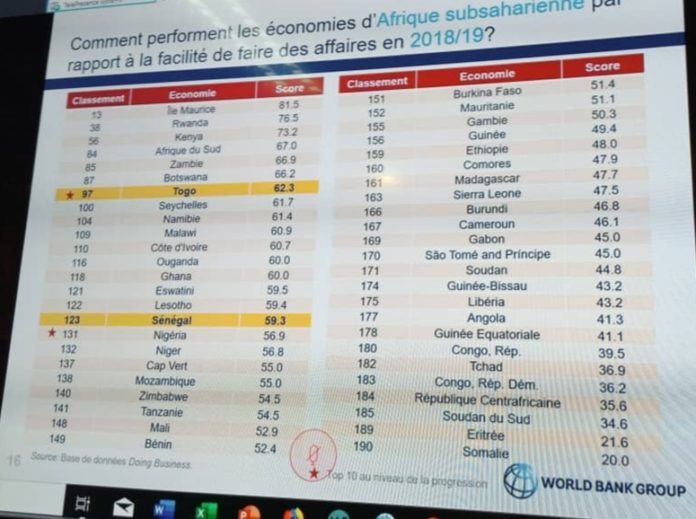 The World Bank released this Thursday, a new edition of the Doing Business report that measures the improving business climate around the world. Even though sub-Saharan Africa is underperforming, some countries in the region are doing well.

According to the report, 73 reforms (compared to 108 in 2018) were carried out in sub-Saharan Africa, for an average of 1.5 per country. 65% of the economies in the region have achieved at least one reform over the period of the study, says one.

Two countries in sub-Saharan Africa are in the top 50 worldwide: Mauritius, 13th in the world, the only African country in the Top 20, and Rwanda Paul Kagame who comes in 38th position.

However, Togo and Nigeria are the economies that have achieved so-called remarkable progress. The first is coming out with a jump of 40 places, and integrates the top 100. The now 97th world has, for example, facilitated the transfer of ownership. Nigeria, ranked 131st out of 180 economies, facilitated the execution of contracts by, for example, strengthening the quality of judicial proceedings.

Overall, business creation, building permit approval and lending are the areas in which the countries in the region have made the most reforms (12 economies per indicator). Only Nigeria and Sierra Leone are reported as reforming countries in the area of ​​cross-border trade.

“Sub-Saharan Africa remains one of the poorest regions in terms of correction” of its handicaps, according to Doing Business 2020.

Sub-Saharan Africa, the scene of the weakest growth in 2021 (IMF)

Doing business: the good and bad students of the 2020 ranking