High Power Exploration (HPX) today signed with the Guinean government an agreement to acquire a 95% stake in the Nimba iron ore deposit owned by BHP, Newmont Goldcorp and Orano.

Located in the south-eastern forest region, this deposit would contain about one billion tonnes of high-grade iron ore containing very low levels of impurities, according to HPS, quoting a 2015 study report. by the United States Geological Survey. « Iron ore of this quality is essential for reducing energy consumption, greenhouse gas emissions and slag production during the steelmaking process, » says the privately-held company. mining exploration and development domiciled in the United States.

The company announces, moreover, having reached an agreement with the authorities including a 15% free government participation in the capital of Guinea Iron Mines Company (SMFG), the Guinean company operating the project, as well as fiscal arrangements. and on royalties and a development schedule.

« We are confident that this project will be developed quickly and efficiently, » Abdoulaye Magassouba, Guinea’s Minister of Mines, told Reuters. 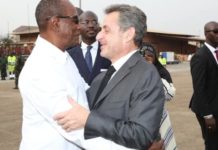