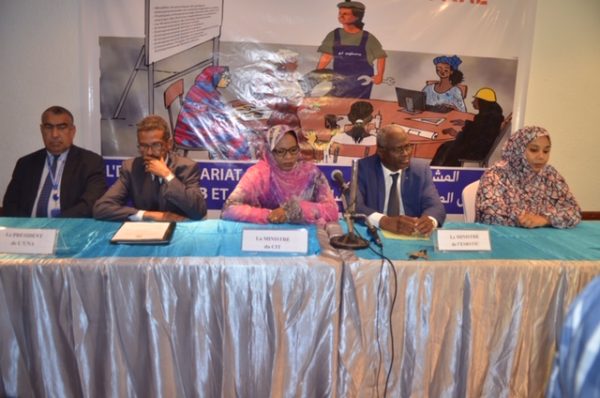 Jointly organized by the University of Nouakchott Al Asriya (UNA) and the Research Group on Entrepreneurship in Africa (GREA), the first symposium on Women’s Entrepreneurship was held in Nouakchott from April 11 to 13, 2019 an evocative central theme. “Between DIY and survival, what economic models for women’s entrepreneurship in the Maghreb and the Sahel: Assessments, challenges and perspectives”

Opening the conference, the Minister of Higher Education, Scientific Research and Information and Communication Technologies, Dr. Sidi Ould Salem, said that the theme of the conference fits perfectly with the guidelines of President Mohamed Ould Abdel Aziz on the promotion of women, development of innovation and scientific research.

He added that women in Africa in general and more particularly in the Maghreb and the Sahel play a decisive role in economic and social life.

Addressing the case of Mauritania, the Minister stressed that at the political level, participation in public life has been strengthened, in particular through the ratification of the main international instruments on women’s rights and the implementation of a national policy. quota for elective positions.

Regarding the economic field, the minister said that the national policy for the advancement of women, implemented by the government of Prime Minister Mohamed Salem Ould Bashir, probably explains the strong presence of women in all sectors of the economy .

The Minister finally urged participants from 11 countries to reflect on the issues facing policymakers, such as the constraints to the development of women’s entrepreneurship and the appropriate development strategies for empowering and empowering women. economic emancipation of women.

For his part, the president of the Nouakchott Al Aasriya University, Professor Ahmed Haouba, emphasized that scientific research, innovation and entrepreneurship constitute a fundamental axis of the strategic plan of Nouakchott Al Aasriya University and that its The institution supports this important event, which was attended by eminent professors and researchers from Algeria, Cameroon, Canada, the Ivory Coast, Ethiopia, France, Mali, Morocco, Senegal and Togo.

Finally, he thanked the organizers and all the structures that contributed to the financing of this scientific event.

The opening ceremony was attended by the Ministers of Commerce, Industry and Tourism and Social Affairs, Children and the Family and Heads of Higher Education and Academic Institutions in Mauritania.

This symposium identified and analyzed a set of factors that positively or negatively influence the development of entrepreneurship in the Maghreb and Sahel countries.

These are general factors in the political, administrative and judicial sphere, in education, in the economic and social environment. Of course, at the level of each country, it has been deepened taking into account its specificities in its history, its own culture, geographical and climatic considerations.

Requests are emerging so that on the basis of exchanges with local adaptations, opens in each country of bases of the entrepreneurship.

Among the recommendations of the forum to facilitate women’s entrepreneurship is a request for tax simplification, the reform of the financial environment, the creation of guarantee funds to facilitate access to credit and the spread of micro-credit.

A dynamic and competitive banking system, capable of supporting business creators and specialized and dedicated financing structures for SMEs, should facilitate the targeted objectives.

Mauritania: the Autonomous Port of Nouakchott in the fold of Olam

Echoes of the African Union Summit in Nouakchott