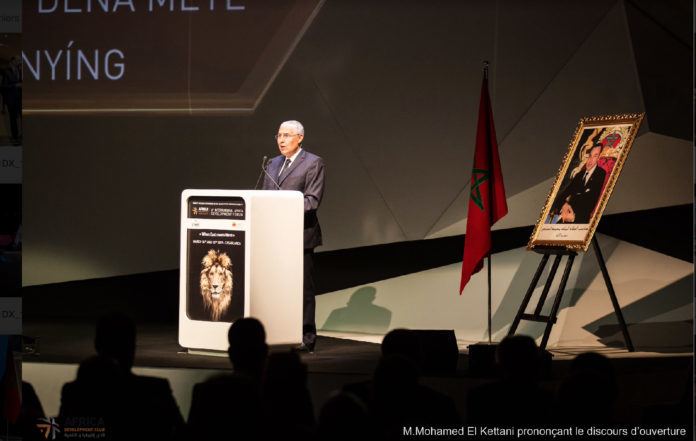 If there is one topic that dominated the debates on March 14, 2019 on the first day of the Africa Development Forum, it is African integration.

The question was the final loop of the intervention of Mohamed El-Kettani, CEO of Attijariwafa Bank who invited all participants to reaffirm “our belief in an integrated common space of hope and future, to protectionist temptations at work at the international level “. And the banker insisted: “Invest in our human capital, in the advancement of African women, in strengthening our infrastructure, and in implementing credible governance schemes. Let’s work on the implementation of concrete projects, carrying a well-thought-out co-location ensuring job creation and transfer of expertise “.

For his part, Mohcine Jazouli, Moroccan Minister in charge of African Cooperation, noted a positive change in mentality with regard to Africa and African integration: “to speak today of Africa seems obvious. But, 10 years ago, we had to be clear-sighted and bold to offer our continent this space, this place of reflection and exchange, which has brought so many opportunities. ”

Present at the meeting, Abdallah Boureima, President of the West African Economic and Monetary Union Commission, presented the community organization that brings together eight West African countries with CFA franc as a lever for regional economic integration. Referring to the role of Moroccan banks that have invested heavily in the area, the UEMOA High Commissioner believes that the recovery of Africa’s economic and structural challenges requires integration.

The conference being marked under the sign of the meetings between East and West, it is quite naturally that following the western part of the continent, the Horn of Africa is expressed. Dr. Aklilu Hailemichael, Deputy Minister of Foreign Affairs in charge of Economic Affairs and Diaspora in Ethiopia, emphasized the importance of “cooperation and free trade areas as important and indispensable elements for the economic and political stability of the country. Continent. As a subregional stability hub, Ethiopia has provided leadership and invested in road, airport and rail infrastructure to link Djibouti, Sudan and the entire region.

These Casablanca exchanges were enriched by the point of view of China, Africa’s leading trading partner: “In China, people say that in order to develop, you have to build roads”, comments the ambassador of this country in Morocco, who spoke about the China-Africa partnership and the new Silk Road, which, he says, is about synergies and integration.

The ongoing Forum brings together 2,000 economic and institutional operators, both African and international, from 30 countries.

The Club Afrique Développement, which is an extension of the Forum, also offers its 3,000 members throughout the year, its services including business meetings, sector missions, platforms for linking and access to information in all countries where Attijariwafa bank is present and beyond. “The Forum has a singularity since it brings us together in 3 dimensions; the first is that of the debate on concrete topics carried by high-caliber experts, the second is related to business meetings between African companies and the third to the Investment Market “, says Mouna Kadiri, Director of Club Africa Development . The Africa Development Forum is mainly an opportunity for business meetings between economic operators. More than 4,000 B to B meetings are planned, confirming the enthusiasm of the operators for this event.

The “South-South Cooperation Awards” which will be awarded today to the best companies involved in the development of intra-African trade and investment and the “Young Entrepreneur Trophies” rewarding the ambition and dynamism of young entrepreneurs and project leaders at the African level, will conclude two days of strategic exchanges.

In the Central African financial market, Harvest is ahead of Attijariwafa bank

The Attijariwafa bank Group website gets a new look