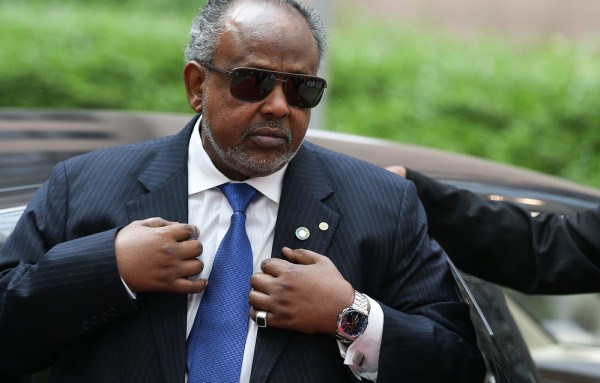 Received with great pomp by Emmanuel Macron in Paris, Djibouti President Ismaïl Omar Guelleh continues to persecute his people and turns his back on his former Western allies.

Ismaïl Omar Guelleh at a « Forum for Peace »: the image would have something to smile about, if it was not so sadly ironic. The autocrat of Djibouti, nicknamed « IOG », was indeed invited as number of heads of state and government to attend the official ceremonies commemorating the centenary of the armistice, as well as the Forum for Peace organized in Paris by Emmanuel Macron, at the beginning of November.

How IOG mutes and pursues opposition
In power since 1999, IOG also took advantage of his arrival in the French capital to inaugurate his country’s new embassy in Paris. A visit that, according to Djibouti human rights defender Omar Ali Ewado, « will unfortunately have no positive impact on the people of Djibouti ». « This is a marketing operation so that its image outside is good, » the expert analysis in an interview with L’Humanité.

« Because in Djibouti, the moment I speak to you, continues Omar Ali Ewado, the opposition, already divided, continues to be muzzled by a regime that dreams neither more nor less than this opposition disappears radars. Democracy calls alternation, a scenario that Mr. Guelleh categorically refuses. Today, he is even gagging civil society. Arrests of citizens take place arbitrarily. Especially people who have expressed themselves on social networks.

And the human rights defender recounted the misadventures of a person who simply broadcast a photo of sleepy IOG during a public appearance, which was enough for her to be behind bars. « The political police are constantly watching us, » says Omar Ali Ewado. Our phones are tapped. All of this completely stifles civil society. A dozen people are now in prison for having expressed themselves on social networks.

Djibouti bets on China to the detriment of former allies
If France, with other great powers, continues to support the IOG regime, it is because Djibouti, like the whole of the Horn of Africa, represents for them a strategic stake of the first order. From the military point of view, Paris, Washington and even Beijing have military bases on Djibouti territory; and from an economic point of view, the ports of Djibouti being located at the entrance to the Red Sea and facing the Bab-el-Mandeb Canal, the fourth world sea passage for energy supply.

For several years, however, Djibouti has opened more and more to Chinese investments, to the detriment of its historic allies, France and the United States. What makes the doctor of political sciences Sonia Le Gouriellec say that « the dependence of Djibouti on China is still relevant. China has become a major backer and the central actor in the construction of infrastructure critical to the development of the country.

As the expert tells the Arab world, « in the past two years, China has lent nearly 1.4 billion dollars to Djibouti. In absolute terms, this sum is « modest », but the country is small and that represents a large part of its GDP. And the dependence is worrying since China holds more than 80% of this debt. State dependence and interventionism that is also reflected in worrying trade reversals, like the exclusion, last February, of the Emirati company DP World from the Djibouti port of Doraleh, in favor of China Merchants .

If DP World announced retaliation, « the recent nationalization of the port and the exclusion of DP World, regardless of the legitimacy or otherwise of the decision, is not reassuring for investors, » said Sonia Le Gouriellec, according to which « the business climate is sluggish in Djibouti ». Will the authoritarianism of IOG and its changes in strategic alliances be enough to have their doctrine reviewed by the Western powers?