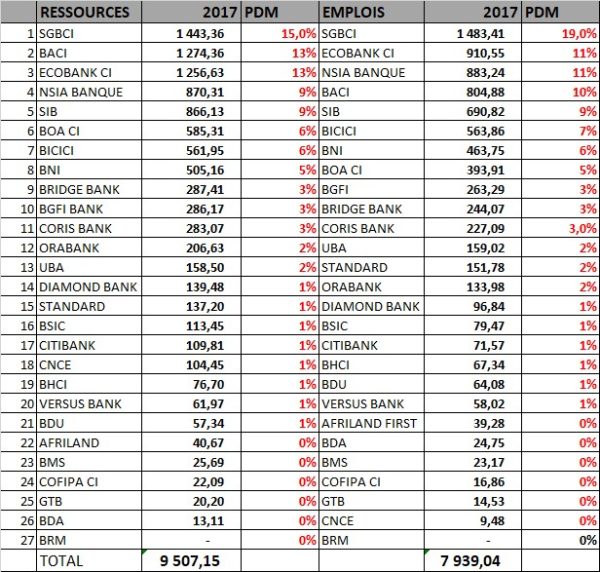 By Kouao Brice, The School of the Abidjan Stock Exchange
At December 31, 2017, the leading bank in Cote d’Ivoire in terms of outstanding loans and deposits is SGBCI. With a 15% share of the market, it is ahead of the Atlantic Bank of Cote d’Ivoire, the Ivorian subsidiary of the Moroccan group BCP in terms of resources. In terms of jobs, its 19% share of the market, the place far ahead ECOBANK CI. The Ivorian subsidiary of the French group SOCIETE GENERALE has demonstrated a responsiveness in a sector where competition has increased in recent years.

Indeed, ten years ago (in 2008), the sector had only 18 establishments. From now on, 27 are fighting over the favors of the Ivorian people for financial services. Despite this fact, SGBCI has retained its market share.

A battle takes place for the other two places on the podium between ECOBANK CI, a subsidiary of the pan-African group of the same name, BACI and NSIA BANQUE CI. Each of its structures has achieved a strong growth of its resources and jobs between 2013 and 2017:

Despite its progress, each structure retains its rank compared to 2013.

The perception of the potential of the Ivorian market is not the same whether one is in Rabat or in Paris. While Moroccan banks are stepping up their market-winning actions, European banks with the exception of SGBCI seem not to be considering the issue in the same way.

Between 2013 and 2017, the SIB network grew from 43 branches to 60 branches, an increase of 17 units in 4 years. Meanwhile, BICICI, which had 37 branches in 2013 (less than the SIB in the same period) created only 6 branches during the period. The modesty of the BICICI network does not seem to be offset by a deployment in the digital world as ECOBANK CI does. In these conditions, the Ivorian subsidiary of the French group BNP PARIBAS is losing ground to the Ivorian subsidiary of the Moroccan group ATTIJARIWAFA.

One of the most spectacular comebacks of this ranking comes from the Ivorian subsidiary of Burkina Faso group CORIS BANK. Arrived just five years ago in 2013, CORIS BANK CI is now ranked 11th in our rankings in terms of resources and jobs.

This success could be explained in part by the presence of a strong Burkinabe community (between 3 and 4 million) in Côte d’Ivoire. They work in this country and repatriate each year large amounts in their countries of origin.

Among the new banks of the Ivorian landscape, Nigerian banks are struggling to find a place. Yet their arrival from 2008 marked the beginning of a marked dynamism in the sector. UBA, ACCESS BANK, DIAMOND BANK, GT BANK are indeed heavyweights of the financial sector in Nigeria. But ten years later, the epic in Ivory Coast has more the appearance of a survival course than a honeymoon.

In 2013, ACCES BANK sold its Ivorian assets to the Cameroonian group AFRILAND FIRST BANK. The latter, despite its expertise acquired in the CEMAC zone, is ranked 22nd place with 0.4% of resources and jobs in the sector. This contrasts with the performance of CORIS BANK CI while the two banks arrived in Ivory Coast the same year.

DIAMOND BANK CI, 14th in our ranking with 1% market share, has just been sold to the NSIA group with the other French subsidiaries of the Nigerian group.

Some reasons for these performances had already been mentioned by the magazine YOUNG AFRICA in its article of January 26, 2016 entitled ” Why Nigerian banks are struggling in Côte d’Ivoire ”. Three years later, the situation has not really changed.

The concentration of the sector

Given the number of players (27 as of 31/12/2017), we could consider the banking sector as open with constantly changing positions. However, by closely studying the weight of the actors over time, we find that the activity is concentrated in the hands of a few.

This concentration highlights the limits of the dynamism observed in recent years. Between 2008 and 2017, the country hosted on average one new establishment per year. Nevertheless, none has presented a differentiated value proposition perceptible by the Ivorian LAMBDA not yet banked. The innovations presented in the press come almost exclusively from the old establishments. (With the exception of the account opening via application proposed by STANBIC). Under these conditions, it is difficult for newcomers to stand out and take shares from the old ones.

CONCLUSION
The banking sector is making good progress both in terms of jobs and resources. Between 2013 and 2017, resources increased by 5 109 billion (+ 117%) from 4327 billion to 9507 billion. Jobs are increased in similar proportions (+ 107% from 3,785 billion to 7939 billion) However, this good dynamic is more to be counted on the leaders than the newcomers.The latter accumulate more than 75% of the activity since 2013 and compete to reach more customers, but the lines could move in the future if structures such as CORIS BANK CI continue their momentum.