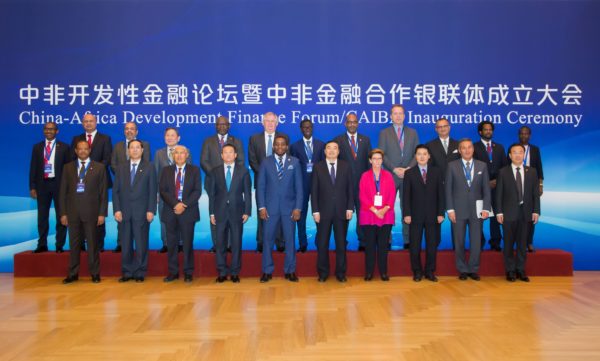 Wednesday 5 September, 16 African banks including RAWBANK, the first banking institution in the Democratic Republic of Congo (DRC), and China Development Bank (CDB) signed an agreement for the establishment of the China-Africa Inter Bank Association in Beijing (CAIBA)

RAWBANK (www.Rawbank.cd), the only Congolese bank to have been selected as founding member of this cooperation, hence assumes its leading role in the Congolese banking sector alongside international and African banks. This agreement marks the official establishment of the first China-Africa financial cooperation multilateral mechanism.

Based on the presentation by H.E Xi Jinping, President of China, aimed at enhancing China-Africa relations and promoting “10 principal cooperation plans” between this country and the African continent, “eight major actions” of China-Africa cooperation were planned in order to advance the partnership.

Taking into account the deficit in meeting the funding needs of African countries with regard to industrialization, infrastructure connectivity and poverty alleviation, a closer collaboration between Chinese financial institutions and African countries was decided.

Within this context, the China Development Bank (CDB), represented by its President, Mr Hu Huaibang, and peer financial institutions in Africa jointly established the China-Africa Inter Bank Association (CAIBA), which is a concrete move in achieving win-win cooperation and better quality and higher common development.

RAWBANK, Congo’s lone bank to be selected owing to its leading position in the banking sector for more than 16 years, is henceforth one of the 16 founding members of CAIBA alongside international and Pan-African banks such as Standard Bank, Absa, Attijariwafa Bank, to name only a few.

With CDB, CAIBA will, in the long term, enhance financial cooperation between all member banks to advance partnership in various domains such as China-Africa infrastructure interconnection, international cooperation and exchange in the humanities.

This agreement is proof of CDB and RAWBANK commitment to strengthen the economic ties and investments between China and African countries, as part of the Forum on China-Africa Cooperation (FOCAC).

Established in 2002 by the Rawji Group, operating in the Democratic Republic of Congo since the start of the 20th century in the areas of trade, distribution and industry, RAWBANK (www.Rawbank.cd) is the country’s largest bank as it was the first-ever to exceed 1 billion dollars in total turnover in 2015. Having more than 1 600 staff members with close to 100 sales points, 300 000 customers and 25% of market shares, RAWBANK is a key player in the development of Congo’s economy. Having been certified and won and award, it is today considered a crucial financial stakeholder in the DRC, for individuals and SMIs/SMEs, as well as for major enterprises and international institutions. RAWBANK is rated by Moody’s (B3), certified as ISO/IEC 20000 and ISO/IEC 27001, and has established funding partnerships with several international donors (Proparco, IFC, Shelter Africa, etc.). Safety, cost-effectiveness and sustainability are RAWBANK’s operational priorities to consolidate its growth strategy, in particular towards individuals and the private sector.

The AfCFTA, an opportunity for Africa’s youth to accelerate trade and industrialization

Cybastion leads the way to Africa with major deals signings