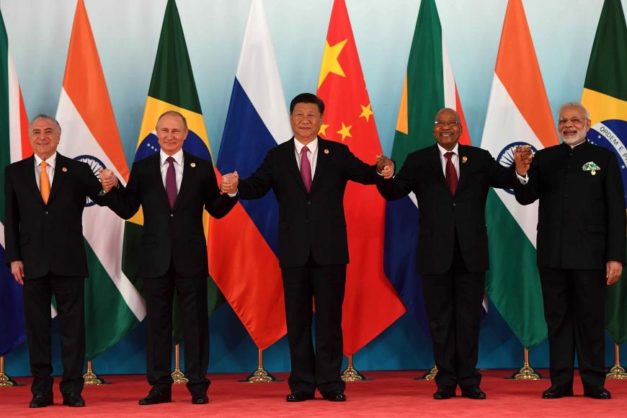 It is in a context marked by the trade war, mainly between the United States of Donald Trump and China of Xi-Jiping that the BRICS opened, Wednesday, July 25, 2018, their 10th summit in Johannesburg.

The theme of the meeting reflects the ambitions of the member countries (Brazil, Russia, India, China, South Africa) for the continent. “Brics in Africa: cooperation with emerging countries for inclusive growth in the era of the Fourth Industrial Revolution”.

Each of these emerging powers has its own African agenda. Last arrival in what until then was limited to a race for raw materials, Russia set foot in the Central African Republic, in the heart of the French pre-square, while multiplying agreements of technical and military cooperation with various countries.

Not enough to embarrass the Chinese ogre, which remains the main trading partner of the continent, its first investor and, recently and much to the chagrin of the IMF and the World Bank, its first creditor. A trend that will strengthen at the end of this summit as China announces a $ 14.7 billion investment program in South Africa.

The two countries (China and Russia) intend to define at this meeting, together with the other three powers, a strategy to face the American threat.

Indeed, President Donald Trump has declared a trade war against his commercial rivals, including China, the European Union and Russia. Washington launched a first salvo in the second quarter of the year on steel and aluminum – which China is the main target – before threatening, among other things, to raise tariffs on the automotive industry . This, in the name of a security of supplies of the USA.

In response, Beijing had no choice but to denounce “the worst trade war in history,” and to tax new American products. Chinese President Xi Jiping, who preceded his arrival at the BRICS summit with a trip to Senegal and Rwanda, said that “the Johannesburg Summit is of particular importance given the new circumstances”. .

Moreover, this meeting with other leaders will discuss new measures to fight against protectionism in accordance with the rules of the World Trade Organization (WTO).

Formally created in 2009, the BRICS block, derived from an acronym originally created by Goldman Sachs, brings together Brazil, Russia, India, China and South Africa, five countries that present to them alone, 42% of the planet’s population, 2/3 of its growth, and more than 20% of global GDP. The main goal of the emerging club is to strengthen its economic and political weight on the international scene. Africa will serve in this context of raw material reserves and outlets for the (usually more affordable) industrial products of the BRICS.

In Beijing, Angolan João Lourenço gets a loan of 2 billion dollars