Guinea: US sanctions against Russia could have collateral repercussions 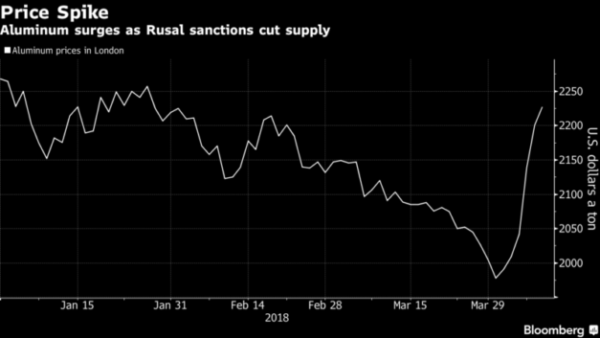 The consequences of Donald Trump’s decision on Friday, April 6, 2018, to punish 24 people close to Russian President Vladimir Putin, including Russal’s CEO, Russian billionaire Oleg Deripaska, the group’s majority shareholder, could generate collateral effects on investments. from the world leader in aluminum. Beyond the expected losses of assets on US soil, there is the case of Guinea.

Indeed, these sanctions could have repercussions on Rusal’s assets in Guinea, notably on the bauxite company in Kindia, which produces 3.5 million tonnes per year, and jeopardize the plans to revive the Alumina plant. Friguia stopped since 2012.

Even more worrying, these sanctions could affect the DIAN-DIAN bauxite mining project planned to start at the end of April for an entry into production in 2019. It is an investment of 220 million dollars which is thus threatened. .

Beyond the panic caused by the US sanctions on stock exchanges, especially on the Hong Kong Stock Exchange where is listed the Russian giant, which saw its title lose 2/3 of its value, rising from 4 , 64 dollars to 1 dollar 43 in just ten days, and the London Metal Exchange (LME) where the price per ton of metal was trading up sharply to 2385 dollars, these sanctions represent a real financial shock wave.

The freezing of the property of Deripaska as well as those of Rusal on the American territory and the prohibition to the American citizens and even to the non-American entities to do business with Russal or the personalities targeted by the sanctions – in particular Deripaska – or which would facilitate transactions, important in their favor under penalty of US sanctions knowing that more than 10% of the total sales of Rusal go to the United States or 14% of sales increase the restrictions against Russal even more.

As a result, to avoid the wrath of Americans some shareholders of the Russian giant like Switzerland Glencore or trading partner like Rio Tinto decided to limit the damage by deciding to freeze any commercial operation with Russal to preserve their American interests.

In clear terms, restrictions on the mobility of funds and commercial activities of Rusal and its leaders in addition to losing access to the US market and being abandoned by its partners for fear of sanctions, freeze the essentials of its projects around the world and makes Russal financially vulnerable.