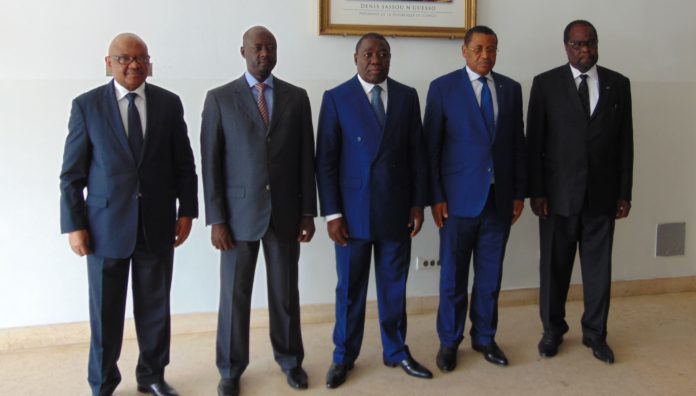 A new step towards the construction of a single regional financial market, in execution of the decision of the Extraordinary Session of the CEMAC Conference of Heads of State of 31 October 2017 in N’Djamena, Chad, on a single market unique finanicer.

This convention must organize their relations until the completion of the process of merging regional and national financial markets, as decided at the extraordinary session of the Conference of Heads of State of CEMAC held October 31, 2017 in N ‘ Djamena (Republic of Chad).

The signing ceremony, under the supervision of Mr. Gilbert ONDONGO, Minister of State for the Economy and Industry of Congo and Chairman of the Steering Committee (COPIL) of the Economic and Financial Reform Program of CEMAC (PREF- CEMAC), was attended by the President of CEMAC, Professor Daniel ONA ONDO, and the Governor of BEAC, Mr. Abbas Mahamat TOLLI.
The convention aims to organize and implement, between the two regulatory authorities, in various forms, the exchange of information, documentation and experiences, as well as consultations, and mutual assistance on all subjects. of common interest in the organization, operation and regulation of financial activities.
To this end, it enshrines the mutual recognition of visas, approvals, and authorizations relating to operations and market participants, the monitoring and supervision of the effectiveness of technical and operational cooperation between the two stock exchanges. of the subregion.

Finally a real vaccine against covid-19: the contagious euphoria of the financial markets

PAP 2A: Senegal will not solicit international financial markets