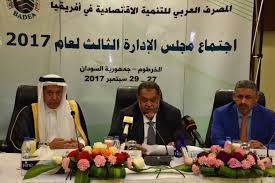 The Board of Governors of the Arab Bank for Economic Development in Africa (BADEA), holds its 43rd session on the Dead Sea, Hashemite Kingdom of Jordan, on April 10 and 11, 2018 in the framework of the Annual Meetings of Arab Financial Institutions joint.

These Arab Financial Institutions, in addition to BADEA, include the Arab Fund for Economic and Social Development, the Arab Company for the Guarantee of Investments and Export Credits, the Arab Monetary Fund and the Arab Authority of the Investment and Agricultural Development.

It should be noted that the Bank began operations in 1975 with a capital of $ 231 million, gradually increasing over the past 43 years to $ 4200 million ($ 4 billion two hundred million dollars).

It should be noted that at the end of March 2018, the total financing commitments of the Bank amounted to $ 5824.768 million, to help finance 653 development projects in various sectors and 749 technical assistance operations, in the form of non-repayable grants, including feasibility studies in a number of areas, institutional support, including training for 10431 Africans, and the sending of 140 Arab experts to African countries, in addition to the organization of meetings and symposia on development in Africa.

In addition, during the period 1975-2017, the Bank spent $ 352,931 million on the private sector, through governments and loans, and until end-December 2017, $ 550 million. dollars to foreign trade operations, as part of its program of financing Arab exports to African countries.

The Hashemite Kingdom of Jordan is one of the 18 Arab states that have contributed to the founding of the Bank, and it plays, consistently, a positive and constructive role in its progression, so as to strengthen the Arab-African relations, and contribute to the economic and social progress of Africa.

BADEA was established by resolution of the Sixth Arab Summit held in Algiers (November 28, 1973). The Bank began operations in March 1975. The Bank’s permanent headquarters are in Khartoum, capital of the Republic of Sudan.

The creation of the Bank meets the objectives of strengthening economic, financial and technical cooperation between the African and Arab regions, to concretize the Arab-African solidarity and to establish the project of cooperation on bases of friendship and equality. To this end, it is assigned to the Bank the mandate of: –

Contribute to the financing of the development of African countries not members of the League of Arab States.
Encourage the participation of Arab capital in African economic development.
Contribute to the provision of technical assistance necessary for the development of Africa.
The Bank has a Governing Council which is its highest authority. It is composed of a Governor and an Assistant Governor for each member state. Governors are usually the finance ministers of the member states.

The Board of Directors is composed of eleven members and enjoys the prerogatives necessary for the management of the Bank, with the exception of the exclusive prerogatives of the Board of Governors.