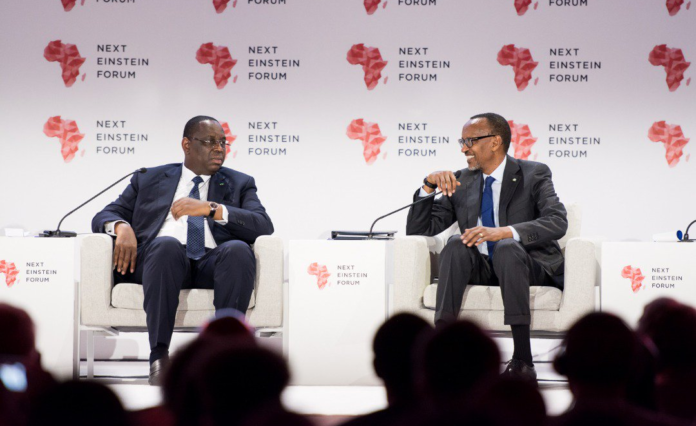 Senegal has mobilized all its energies for the development of development in order to build the future, and it is in this context that it has created the Virtual University which counts 20 thousand students of License, Masters, PhD, in artificial intelligence, according to the President of Senegal, Macky Sall.

“We have created technology parks. We gave prices worth $ 440 thousand euros. At the same time, we are funding digital projects for $ 2 million. We plan to train 3,000 qualified people per year in digital. We awarded 300 scholarships in this area. We organize a 1000 person forum a year for training in digital entrepreneurship, “he said.

The Senegalese President made the remarks at the Next Einstein Forum 2018 (NEF 2018), which is continuing in Kigali. He said he returned to Kigali after signing the ZLEC on March 21st. The reason is that this Forum on Science and Technology is the catalyst for Africa’s development, and that it was launched by itself for the first time in Dakar with its counterpart.

“I am in Kigali because there is a good cause that brings us together and is dear to us, namely: to restore the links between Science and Humanity. Science and technology are the levers of development. There is no development without the support of both, “he continued.

He informed that 5% of Senegal’s GNP comes from the ICT sector, ie. of the knowledge economy. His country has a 20-year program for the structural transformation of the economy. At the same time, it will develop human capital in an inclusive way and in sustainable development. Senegal will also focus on good governance, the rule of law, peace and security, and education.

It is in this context that Senegal must develop infrastructures and laboratories, modernize universities, strengthen innovation in science and technology, give a computer to each student of the University.

“The university should open up to society. We have diversified training and reformed the status of researchers. We are spending $ 830 million on the University. 42.5% comes from direct public funding The rest is provided by partners. Our budget has increased for more knowledge in the context of the industrial revolution, “continued the President of Senegal.

To explain Rwanda’s efforts to rebuild itself after the 1994 genocide, President Paul Kagame, for his part, recalled that youth is an important element that must be taken into account. He emphasized that investment in education is and remains the pillar of politics. For, it was necessary to reorganize the society, to educate young people who grow up, to forge the administration, to create the conditions of a normal life, to privilege the security, the institutions of health, to produce to feed the population, to create jobs and social services , emerge from the catastrophic situation.

“We want all girls and boys to be educated. We must avoid an imbalance in the labor market. It must be done at the level of education. That’s why ICT education was a priority, like health. The people as the beneficiaries of our efforts are at the center of everything, and we had to see those who were to generate success. It was necessary to avoid also the re-edition of the tragedy, and to be able to reborn of our ashes, “he continued.

Professor Thierry Zomahoun thanked President Kagame and Macky Sall because they agreed to be the bearers of the NEF and AIMS projects.

“The two Presidents inspired the good achievements of scientists. They created a framework to inspire them. It’s a matter of vision to keep investing for innovation and supporting young people, “he said.

After this presidential panel, the two Heads of State gave prizes to seventeen young scientists who have distinguished themselves in performing scientific research in various sectors. (To be continued…)

Gabon: Why does Ali Bongo want to join the Commonwealth?

Africa: Who is accompanying Emmanuel Macron in Rwanda?