The Ivorian government has decided to abandon the contentious provisions of tax schedule 2018 this Monday after a meeting with representatives of the private sector. The information was given last night by Parfait Kouassi, the first vice-president of the Ivorian Chamber of Commerce and Industry after an audience with the first Gon Coulibaly.

The latter, who was accompanied by Jean-Marie Ackah, the president of the employers and Mr. Boguifo (president of the Federation of SMEs), welcomed the « courageous decision » of the authorities for the cancellation of almost all the provisions of the 2018 tax schedule, in response to private sector solicitations.

The text that led to new tax burdens sparked an uprising by the Ivorian private sector, which had presented it as a brake on business competitiveness. Ivorian President Alassane Ouattara subsequently called for a « deepening of discussions » with the private sector to revise the tax schedule before deciding on its suspension late last month.

According to the Ivorian tax authorities, the text was supposed to cause, in theory, additional charges of 75,4 billion FCFA. Abidjan whose tax rate ratio (ratio to GDP) rose from 15,6% in 2016 to 16% in 2017 hoped this year to approach the WAEMU community standard that oscillates between 17 and 20%. 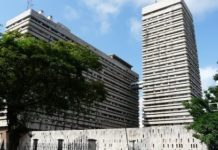